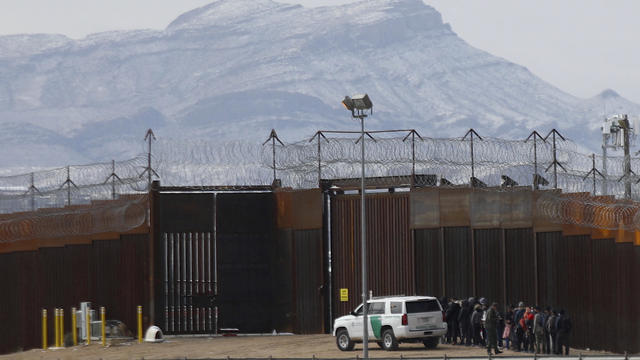 The number of migrant arrivals along the U.S. southern border soared in March to the highest levels since 2000, surpassing 200,000 for only the third time during the Biden administration, according to government statistics submitted to a federal court Friday.
U.S. Customs and Border Protection reported processing migrants 221,303 times along the Mexican border last month, which overtook the previous peak under the Biden administration in July 2021, when U.S. officials recorded 213,593 migrant encounters, agency figures show.
Nearly 210,000 of the migrant encounters last month were recorded by CBP, which arrests migrants who entered the U.S. illegally. The last time monthly Border Patrol apprehensions were higher was in March 2000, when the agency reported 220,063 migrant arrests, according to historical CBP data.
The increase in border arrivals comes as the Biden administration prepares to wind down the Title 42 pandemic-era rules, which have allowed U.S. authorities to swiftly expel migrants without processing their asylum claims. The policy, first instituted under the Trump administration, is set to expire on May 23.
U.S. immigration authorities carried out 109,549 expulsions under Title 42 in March, representing nearly 50% of all migrant apprehensions. Roughly 111,000 migrants and asylum-seekers who arrived last month were processed under regular immigration procedures, which allow them to request asylum.
The encounters recorded by CBP do not represent the number of migrants processed by the agency because many border-crossers attempt to enter the U.S. multiple times. Since the start of the pandemic, the rate of repeat crossings has soared, as some migrant adults try to enter the U.S. after being expelled.
Single adults who are not expelled are either detained, deported under a process known as expedited removal or released with a notice to appear before a judge. In March, U.S. officials deported or returned 12,070 migrants who were processed under regular immigration procedures, the government data shows.
Migrant families traveling with minor children who are not processed under Title 42 are generally released with court notices, sometimes with tracking devices, such as ankle monitors. Most unaccompanied children, who are exempted from Title 42, are transferred to government shelters in the U.S. interior.
In March, U.S. border officials released 65,771 migrants with a court notice or under a process known as parole, which allows them to admit foreigners on humanitarian grounds. Just over 24,000 migrants were sent to Immigration and Customs Enforcement custody. Roughly 9,000 remained detained by ICE as of April 3.
The planned termination of Title 42 in late May has alarmed Republicans and some centrist Democrats, many of whom have tough re-election contests this November.
On Thursday, 18 states joined a lawsuit filed by Republican officials in Arizona, Louisiana and Missouri seeking to block Title 42's rescission. Texas' Republican Governor Greg Abbott has launched additional moves to challenge the Biden administration following the Title 42 announcement, directing state officials to bus migrants to Washington, D.C., and inspect commercial trucks entering the U.S.
In Congress, four moderate Democratic senators joined a group of Republicans to introduce a bill earlier this month that would force the administration to delay ending Title 42 until after the national public health emergency over COVID-19 if lifted.
The Democratic critics of the decision to lift Title 42 have said they don't believe the Department of Homeland Security is adequately prepared to respond to a potential spike in border arrivals when the Title 42 expulsions are halted.
But DHS officials have said they've started making preparations for the policy's end, deploying additional Border Patrol agents, expanding capacity at migrant holding sites and securing more buses and aircraft to transport migrants and prevent overcrowding at processing facilities.
According to a DHS contingency plan, the department is preparing for worst-case scenarios in which between 12,000 to 18,000 migrants enter U.S. border custody per day, an unprecedented increase from the current 7,000 daily apprehensions average.
While some more centrist Democrats have joined Republicans in criticizing the end of Title 42, many Democrats have called for the policy's termination for months, citing the end or relaxation of other pandemic restrictions.
Progressive advocates have also pointed out that the Trump administration first implemented Title 42 in March 2020 over the objections of Centers for Disease Control and Prevention's public health experts who did not believe the extraordinary measure was needed to control the spread of the coronavirus.
In her termination order earlier this month, CDC Director Rochelle Walensky said Title 42 was no longer necessary to protect public health because of the availability of coronavirus mitigation tools, the drop in infections since the winter Omicron surge and increased vaccination rates in the U.S. and abroad.
Camilo Montoya-Galvez is the immigration reporter at CBS News. Based in Washington, he covers immigration policy and politics.
source: https://www.cbsnews.com/news/immigration-march-migrant-arrivals-u-s-border-highest-since-2000/