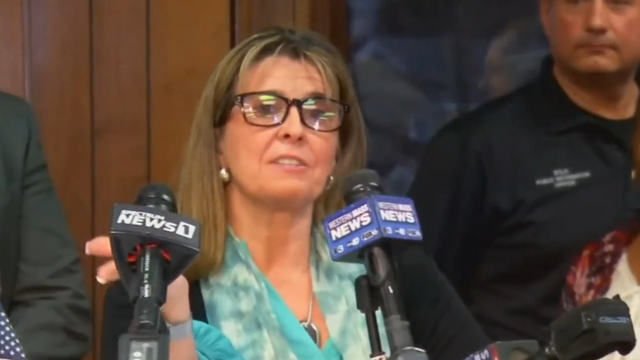 A Massachusetts school superintendent is facing a federal charge for allegedly lying to officials about sending nearly 100 threatening text messages to a candidate for chief of police, the Department of Justice announced Wednesday. According to a criminal complaint, Chicopee Superintendent Lynn Clark, 51, allegedly sent the messages to a candidate seeking to become the town's chief of police, causing them to drop out of contention.
In November 2021, the candidate, who was not identified, received several text messages threatening to reveal information that would damage their reputation, the DOJ said. The messages appeared to be sent with the express purpose of forcing the candidate to drop out of the race, according to the Justice Department. Authorities were made aware of the messages in December.
Phone and internet records showed that Clark allegedly bought fake phone numbers through a mobile app and used them to send "approximately 99"  threatening messages.
As a result of the threats, the candidate withdrew their application and the city had to delayed its selection process.
Clark allegedly told investigators on several occasions that she did not send the messages, and suggested other city workers, a member of her own family or the candidate's colleagues may have sent them instead, the Justice Department said.
But the superintendent admitted later that she was behind the threats, according to prosecutors.
She has been charged with one count of making false statements, which could land her in prison for up to five years and an additional year of supervised release, as well as a fine of up to $10,000 if convicted. Clark was scheduled to make her first appearance in federal court Wednesday.
Chicopee mayor John Vieau called Clark's arrest "disheartening for the City," CBS Boston reports. He said the school district's committee will meet Wednesday night "to decide on a proper course of action."
Tori B. Powell is a breaking news reporter at CBS News. Reach her at [email protected]
source: https://www.cbsnews.com/news/lynn-clark-school-superintendent-massachusetts-arrested-lying-threatening-messages-police-chief/