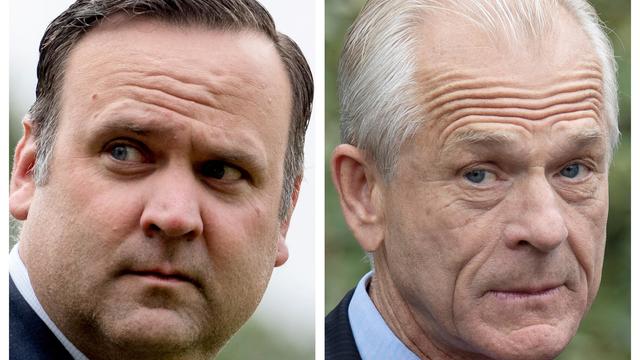 The House is set to vote Wednesday on a motion to refer criminal contempt charges against two former Trump aides who haven't complied with subpoenas from the committee investigating the January 6, 2021 assault on the Capitol.
If passed, the motion will refer contempt charges against Peter Navarro and Dan Scavino to the Justice Department, after the former aides refused to comply with subpoenas to appear before the committee. Other contempt votes for Steve Bannon and Mark Meadows have already passed the House.
Should the contempt motion against Navarro and Scavino pass, it would be up to the DOJ to decide what to do with the referrals. The Justice Department charged Bannon in November with two counts of contempt of Congress, and his trial is set to start in July. The Justice Department has not yet moved on charges against Meadows.
In a recent report, the January 6 committee accused Navarro, a former top trade adviser for Trump, of working with Bannon and others "to develop and implement a plan to delay Congress' certification and ultimately change the outcome of the November 2020 presidential election." Scavino was the ex-president's social media guru and deputy chief of staff, and a longtime assistant to the president even before the White House. The committee claims they have "reason to believe that Mr. Scavino was with then-President Trump on January 5 and January 6 and was party to conversations regarding plans to challenge, disrupt, or impede the official congressional proceedings."
Scavino and Navarro have cited executive privilege for why they can't appear, something President Biden has rejected. Rep. Bennie Thompson, chairman of the January 6 select committee, also has said executive privilege can't be claimed without at least showing up.
Some Democratic lawmakers have begun to express frustration with the Justice Department and Attorney General Merrick Garland for not following through on indictments against Trump allies related to January 6.
"Attorney General Garland, do your job so we can do ours," said Rep. Elaine Luria, a Democrat from Virginia and a select committee member, last week.
The contempt motions only need a majority of House members to be referred to the Justice Department.
Kathryn Watson is a politics reporter for CBS News Digital based in Washington, D.C.
source: https://www.cbsnews.com/news/peter-navarro-dan-scavino-criminal-referral-house-vote/