By Alexander Gillespie* of

Defence Minister Peeni Henare may not have won Cabinet approval to provide lethal weaponry to Ukraine, but the decision to apply 35 percent tariffs to all Russian imports is a clear sign the government knew its response to Russia's war of aggression had to accelerate. 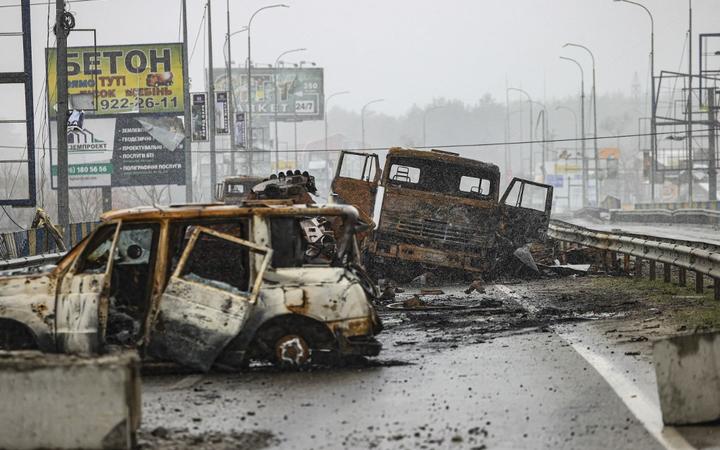 Global stability and security are underpinned by the United Nations Charter and the rule of international law in the form of the International Court of Justice. Russia has put both in the bin.

By conducting a war in probable violation of the most basic rules of international humanitarian law - including deliberate use of thermobaric bombs, landmines and possibly white phosphorus, reckless attacks around the Chernobyl nuclear plant, targeting of hospitals and civilian shelters - Russia's actions appear neither isolated nor ad-hoc.

The latest evidence of apparent execution, torture and rape of non-combatants only confirms this. Given New Zealand's reliance, like all small states, on a rule-based international order, the government must be prepared for further action in accordance with those principles.

Beyond potentially further escalating the tariffs on Russian imports, there are three additional, tangible things that can be done immediately.

First, the government should expel a number of Russian diplomats and support staff from Wellington. The ambassador should remain for now, but their office should be reduced in size.

This will allow New Zealand to retain direct communication with Russia, and probably mean our ambassador in Moscow can stay to protect New Zealand citizens and interests. But Russia will feel the weight of this country's displeasure, with the option of expelling the ambassador if necessary.

Second, as the defence minister clearly wishes, lethal military assistance should now be offered. Assuming the war continues within Ukraine's territorial boundaries, moving from helping Ukrainians protect themselves to helping them actually fight is justified.

Third, New Zealand can actively promote the use of existing (or new) international legal mechanisms for holding to account those who have committed war crimes.

In fact, the country has a long track record in this field, including New Zealanders being appointed to the Tokyo War Crimes Tribunal after WWII, the Khmer Rouge Tribunal, the inquiry into the Gaza flotilla, and at the International Court of Justice.

Although it's unlikely Russian President Vladimir Putin and his inner circle will ever be jailed for their crimes (assuming they never leave Russia again without diplomatic passports), and Russia won't cooperate with any investigation, it's important genuine justice be pursued.

For that to happen, the recording, analysis and judgement of alleged crimes must be done correctly - not only to add to the historical record underpinning the rules of war, but to ensure the atrocities are not forgotten. Future generations need to know what happened and how it stained Russia's reputation.

It also needs to be clear that New Zealand's commitment to justice (and that of other like-minded states) can't be traded away in any future peace deal between Ukraine and Russia.

It won't be easy, and it may well invite threats from Russia, which has been busy removing its signature from the International Criminal Court (ICC) and revoking additional rules to the Geneva Conventions aimed at enhancing the protection of victims of international armed conflicts.

Nonetheless, New Zealand must support calls for an independent investigation into possible war crimes and crimes against humanity in Ukraine, and for the ICC to hear the case. At a practical level, the government can offer forensic, financial and legal aid for that investigation.

Finally, and perhaps most importantly, New Zealand could also offer to help create a special international criminal tribunal to supplement the work of the International Criminal Court.

Already called for by former UK prime ministers Gordon Brown and John Major, such a body would try Putin and his regime for the overarching crime of waging an illegal war.

Focusing on the act of invasion itself, rather than practices on the ground, would be novel - effectively putting a superpower on trial for its decision to unjustifiably invade another country.

It was a mistake this did not happen when the US and Britain illegally invaded Iraq in 2003, and it should not be repeated now. Only by building a better world governed by more effective international law can any lasting global peace be assured.

Pressing for such a tribunal and prosecution may be just a first step, but New Zealand should take it. A future where no nation can wage aggressive war with impunity might seem far off, but there is a way to get there.

*Alexander Gillespie is a law professor at University of Waikato