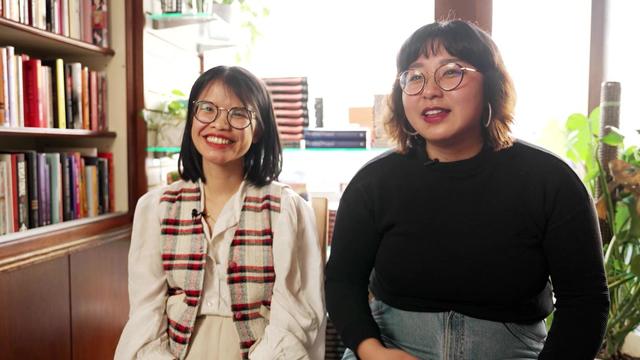 In an evening filled with prose and literary imagination, a monthly community reading series in New York City's Chinatown became an outlet for Asian women writers to share their voices.
"Asian female writers have beautiful, complex stories that are so multifaceted, so many layers to it that aren't — before this time — frequently shown within the publishing industry," Lucy Yu told CBS News. "So, having a space in which we are saying: pause, listen to us, this is what we're trying to say, this is what we're trying to share, is something that's truly important."
Yu is the owner of Yu and Me Books, the first Asian American woman-owned bookstore in New York City. She hosted the reading series in collaboration with The Cosmos, a community organization co-founded by Cassandra Lam and Karen Mok in 2018 that creates content and events centering the experiences of Asian women.
"Storytelling for our community is a way to understand our experience as Asian Americans," Mok said, adding, "A lot of us come from families where identity was not a part of the dinner table conversation. We didn't necessarily study Asian American studies in college. … And I think in our community, I've just seen so many people think that their story is insignificant because it hasn't been shown on the public sphere."
With the reading series and her work as an organizer, Mok said she hopes to reach everyone with a message: "Your story matters."
Before opening her store, Yu noticed a dearth in shops showcasing the diverse range of immigrants' stories.
"Once I did research, I realized there was no lack of work out there. It's just a lack of what's being pushed forward," Yu said.
Amid rising hate crimes against Asian American and Pacific Islanders in the U.S. during the COVID-19 pandemic, both Mok and Yu have stepped up to care for their communities. The Cosmos created virtual "Collective Rest" healing spaces for Asian women, while Yu combined forces with organizations like Soar Over Hate to hand out pepper spray and personal safety alarms.
"I think that was something just for other people to see more than 1,000 AAPI women and femmes line up for that, how important it was and how unsafe we are feeling," Yu said, reflecting on the event that drew lines around the block. But she also saw her role as "offering love and joy" through the stories that are encased inside book covers.
"I think a lot of people come in, especially in the last couple of weeks. They're like, 'Do you have something mindless, funny, but also, like, has representation?' And I'm like, 'Yeah!'" Yu said, adding, "I want to see joy, too, and that's a way of healing. And so I think in any aspect of feeling seen, of feeling, like, just a little less alone — there's a lot of avenues to kind of approach that."
As both Yu and The Cosmos build their respective communities, their missions also align.
"One is creating a space in which we feel protected, feel love and feel safe; and another is, like, okay, we have all this energy and all this anger. How do we channel that to actually cause change in the policies and cause change to make us feel safer?" Yu said.
For Mok, the work of space-building for her organization is an "active practice" that doesn't ask people to "perform in a certain way."
"The deliberate act of saying here is a space that's actually for your storytelling, small groups, has been an amazing way to get people to just say something about themselves in a public sphere," Mok said. "And that's my goal for, like, every event is that each person says something, because once they hear the power of their own voice, they're able to actually see themselves as agents of creating that space as well."
source: https://www.cbsnews.com/news/cosmos-yu-and-me-books-collaborate-to-center-asian-american-women/