How to watch the Lyrid meteor shower peak on Earth Day 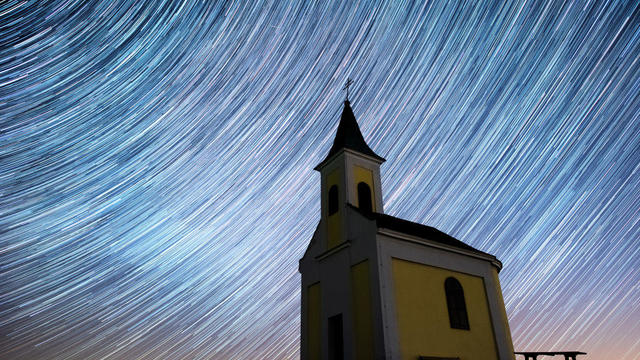 One of the oldest known meteor showers is gracing the night sky next week — coinciding with the celebration of our planet, known as Earth Day. There hasn't been a meteor shower in months, and the Lyrid shower marks the end of the drought.
This year, the Lyrid meteor shower peaks overnight on April 22. This shower has a narrower peak than others, meaning skywatchers won't have all month to spot shooting stars.
The Lyrid meteor shower lights up the night sky every year from around April 15 to 29, as particles shed from Comet 1861 G1 Thatcher. The comet last passed through the inner solar system in 1861 — and it will not return until 2276 due to its 415-year orbit.
There are records of the spectacular light show dating back some 2,700 years, making it as one of the oldest known meteor showers. According to NASA, the Lyrid shower was first recorded in China in 687 BC.
Lyrid meteors appear to radiate from the constellation Lyra the Harp, located near the well-known star Vega, giving the shower its name.
The meteors during this shower are considered medium-fast, zooming into Earth's atmosphere at about 110,000 miles per hour. They are known for their speed and brightness — although viewers should not expect them to be as brilliant as meteors during the famous Perseids shower in August.
Still, about 25% of Lyrid meteors leave a persistent "glowing dust train" that glows for several seconds after they have already passed — creating beautiful shooting stars.
It's possible for the Lyrid shower to feature spectacular outbursts of 100 meteors per hour. Heavy showers occurred in Greece in 1922, Japan in 1945 and the U.S. in 1982.
But in a normal year, a viewer can expect to see 10-20 meteors per hour in the Northern hemisphere and 1-2 per hour in the Southern Hemisphere, under normal weather conditions.
The Lyrids meteor shower is predicted to peak at 4 UTC on Friday, April 22, according to EarthSky.
Unfortunately, this year, a bright waning moon will illuminate the sky during the shower, making it more difficult to spot shooting stars. The shower begins ahead of Saturday's full "pink" moon, named after the herb "moss pink," Phlox subulata.
The hour before midnight, however, before the moon is very high in the sky, may be the best time for star-spotting. But regardless of where you are on Earth, the best time to spot most meteor showers is from midnight until dawn.
If you look directly at the radiant — the point where the meteors appear to be coming from, which will be in the constellation Lyra — the shooting stars will be short. To see longer and more spectacular meteors, it's better to look away.
As always, it's best to escape harsh city lights and view meteor showers in an open space. However, it may be helpful in this case to shade your eyes from the brightness of the moon using a tree or small building. Give your eyes 30 minutes to adjust to the darkness, lie flat on your back — and look up!
Sophie Lewis is a social media producer and trending writer for CBS News, focusing on space and climate change.
source: https://www.cbsnews.com/news/how-to-watch-lyrid-meteor-shower-peaks-earth-day-2022/