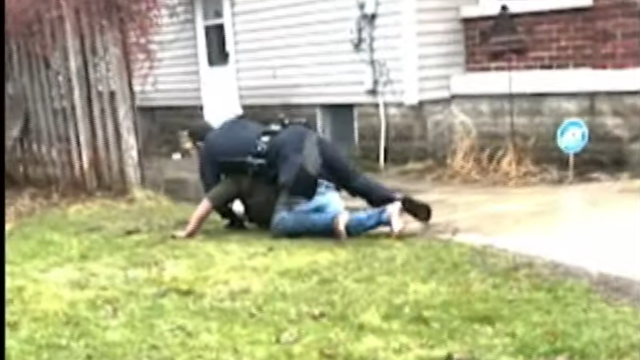 Videos of the fatal police shooting of Patrick Lyoya, a Black man who was pulled over for a traffic stop, was released Wednesday. Lyoya, 26, was shot and killed on April 4 by a police officer in Grand Rapids, Michigan, after a struggle in which the two men appeared to be fighting over the officer's Taser.
The videos released by the Grand Rapids Police Department included the officer's body worn camera, the dashcam from the officer's car, surveillance video from a house across the street and cell phone video captured by a passenger in the car.
The moments just prior to the shooting are difficult to discern, as the body worn camera had been deactivated, the surveillance video is from a considerable distance and the cell phone is often pointed at the ground instead of the officer and Lyoyo. However, the two men appeared to be struggling over the officer's Taser at certain points in the videos.
In the videos, the officer, who is White, pulls Lyoya over for driving with mismatched plates. Lyoya gets out of his car and the officer, who was not identified, immediately tells him to stay in the car. Lyoya remains outside of the car and shuts the door. The officer asks if Lyoya speaks English and for his license several times. Lyoya tells him the license is in the car. The officer then instructs Lyoya to get it.
Lyoya appears to then ask a passenger to get the license, but the passenger seems to not know where it is. As Lyoya tries to walk to the passenger side of the car, the officer tells him to stop and grabs him. After a short struggle, Lyoya manages to get free and a foot chase ensues. The officer tackles Lyoya on a nearby lawn and the two struggle on the ground for an extended period of time as the officer repeatedly tells Lyoya to stop. The officer appears to briefly subdue Lyoya and the two stand up, however, the struggle then continues.
At some point, although it is not clear exactly when due to the close proximity of the struggle and poor camera quality from the surveillance video across the street, the officer takes out his Taser. He can be heard firing it twice, but, according to Cedar Rapids Police Chief Eric Winstrom, the Taser missed Lyoya both times. The two continue to struggle and at certain moments it appears that both men have their hands on the weapon. The two man fall to the ground again as the officer repeatedly tells Lyoya to let go of the Taser. At one point, the passenger appears to say that Lyoya isn't touching the Taser.
With Lyoya face down on the ground, the officer manages to get on top of him. The officer, still telling Lyoya to let go of the Taser, then takes out his gun and shoots Lyoya in the head.
At a press conference Wednesday afternoon to go over the videos, Winstrom said that the body camera had deactivated because the button that controls the recording function had been pressed down for more than three seconds during the struggle. Winstrom said he estimated based on the video that the two men fought over the Taser for approximately 90 seconds.
The officer is currently on paid leave while the Michigan State Police conducts an investigation into the shooting. Winstrom said that the officer would not be identified unless charged with a crime.
During the press conference, Winstrom repeatedly refused to make any definitive statements about whether or not he felt the shooting was justified or if any of the officers actions may have violated department policy. He said those determinations would be made by the state police's investigation.
"I view it as a tragedy," he said.
Attorney Ben Crump, who is representing Lyoya's family, said in a statement following the press conference that "the video clearly shows that this was an unnecessary, excessive, and fatal use of force against an unarmed Black man who was confused by the encounter and terrified for his life."
source: https://www.cbsnews.com/news/patrick-lyoya-shooting-video-grand-rapids-michigan-police/