BA.2 now behind nearly all new COVID cases in the Northeast 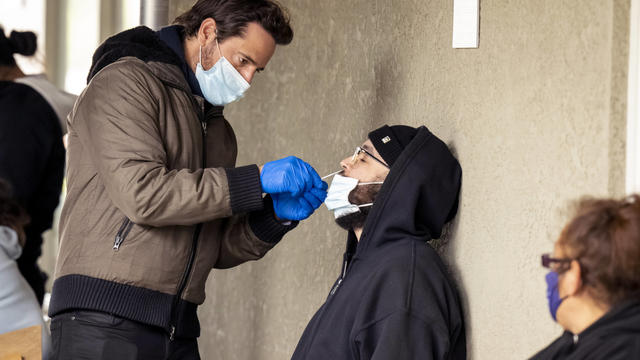 The BA.2 sublineage of the Omicron variant is now responsible for more than 9 in 10 COVID-19 cases in the Northeast, the Centers for Disease Control and Prevention estimated Tuesday, as the region is now responding to upticks in cases and hospitalizations.
Nationwide, prevalence of BA.2 — which has increasingly displaced the BA.1 Omicron subvariant that was behind the winter surge — is estimated at around 85.9% through the end of last week. That's up from 75.4% the week prior.
BA.2's ascent has already led to the Food and Drug Administration revoking authorization for sotrovimab, a monoclonal antibody treatment, over concerns it wouldn't be effective against infections caused by the subvariant. GlaxoSmithKline and Vir Biotechnology say they are working on asking the FDA to greenlight resuming use of the treatment at a higher dose.
And coupled with a nationwide easing of mask requirements and other COVID-19 precautions, local officials are now weighing the possibility that pandemic measures may need to be reimposed.
Citing a recent rise in cases, Philadelphia said Monday that infections had crossed the benchmarks it had set to return to mask requirements indoors.
"We hope by having folks whenever they're in public, indoor spaces we can get ahead of the wave and keep it from reaching a peak like we saw in January," the city's top health official Dr. Cheryl Bettigole said, CBS News Philly reported.
Under the CDC's recently revised "COVID-19 Community Levels" guidance, the vast majority of counties are still in the green zone at "low" virus risk. But under the agency's previous framework, which relied only on COVID-19 case counts, most of the Northeast is at "high" or "substantial" transmission — the levels at which the agency had previously recommended masking indoors.
Philadelphia is at "low" COVID-19 levels but "substantial" transmission, in the CDC's data.
The agency's experts have also acknowledged that Americans' growing reliance on at-home testing is increasingly suppressing the true tally of cases. Wastewater monitoring from the CDC and companies like Biobot Analytics have tracked upticks in virus levels that appear to be outpacing the official counts.
New COVID-19 hospital admissions have accelerated across the Northeast, with the latest weekly averages climbing 8.8% in New England and 19.8% in the New York area, though they remain far below the rates seen over the winter surge.
"Home testing is really changing the case reporting. And we also see that many jurisdictions are choosing to go to less frequent reporting anyways. So it continues to be the case, or it is newly the case I suppose, that the primary metric is more along the lines of hospitalizations and deaths," Caitlin Rivers, associate director of the CDC's disease forecasting effort, said at an event hosted by the University of California San Francisco.
While officials have said for months that BA.2 does not seem to lead to more severe disease compared to its Omicron cousins, studies of the subvariant abroad have turned up at least a modest advantage at spreading faster compared to BA.1.
The Biden administration's health officials say they hope the fallout from the BA.2 wave will not result in the same death toll seen out of the winter.
"Now the cases are starting to come up. The critical issue is: are hospitalizations and deaths going to go up?," Dr. Anthony Fauci, the president's chief medical adviser, said Monday at a lecture hosted by Uniformed Services University.
"We think that there's enough immunity in the community, from either being infected and hopefully vaccinated and then boosted, that we likely would see disassociation between infections and hospitalizations. We're hoping for that," added Fauci.
However, on watch for the next potential variant of concern, scientists and health officials have continued to identify and study dozens of new variants of the virus as it continues to mutate through new infections.
Some are so-called "recombinant" variants like XD and XE, which are hybrids of previously spotted variants. Health authorities in the U.K. said Friday that the rate of XE cases suggested it might be spreading 12.6% faster than BA.2, but cautioned the estimate was preliminary and has fluctuated widely as new data was added.
Others include additional Omicron subvariants like BA.4 and BA.5, which now appear to be displacing BA.2 in South Africa and has also been spotted in Europe. Experts speculate that these mutations might be able to escape the immune defenses from vaccinations or early infections better than the earlier Omicron subvariants, but data is still developing.
While there is no evidence these variants pose a greater risk of hospitalization or death, experts caution a new wave of infections and reinfections could still pose the risk of leaving more people with lingering "long COVID" symptoms.
To address that, Fauci said Monday officials were considering widening the availability of COVID-19 antiviral pills like Paxlovid.
"We are underutilizing Paxlovid. We have more Paxlovid now than we have people who can use Paxlovid," said Fauci.
Currently, Pfizer's pills are reserved only for Americans at the highest risk of severe COVID-19 disease. Around 175,000 courses of the drug have been made available for distribution to states and territories every week.
"Can't guarantee it, but you're going to be hearing soon that we're going to be much more flexible in giving Paxlovid to people who may not necessarily be in a high risk group in order to prevent them, possibly, from getting long COVID," Fauci said.
CBS News reporter covering public health and the pandemic.
source: https://www.cbsnews.com/news/covid-ba-2-omicron-subvariant-northeast-cdc/