Mocked by Biden as "rubble," the Russian ruble has bounced back 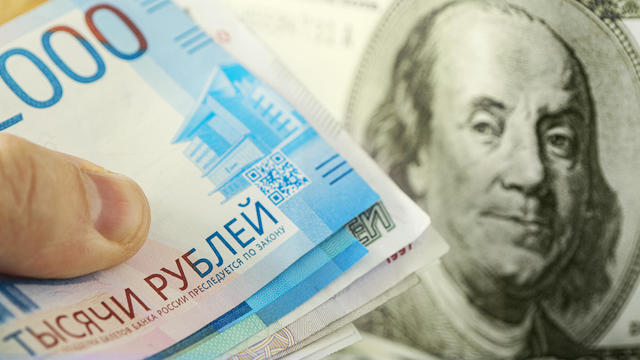 The value of the Russian ruble tumbled 30% after the U.S., European Union and U.K. first issued sanctions in response to the nation's war on Ukraine. That plunge — which in early March lowered the ruble's value against the U.S. dollar to less than 1 cent — prompted President Biden last month to mock the currency as "rubble."
But the ruble has bounced back, almost doubling its value from its low point on March 7. The recent gains mean the currency is now back to its level before sanctions were imposed by the U.S. and other nations.
Reasons for that rebound include support from the Russian government, as well as ongoing purchases of Russian energy from the European Union and other nations, Jane Foley, head of FX Strategy for Rabobank London, told CBS News. Even with the broad-based sanctions, Russia continues to export oil, gas and coal, with Bloomberg Economics estimating that the nation's energy exports will surge by one-third this year to $321 billion.
President Vladimir Putin also has put "massive capital controls" in place to stabilize the ruble, bolstering the currency, Foley noted.
"That stability in the Russian ruble is proving to be beneficial to the economy," she said. "Russians are putting money back into their own banks. That is helping to support the Russian ruble."
Despite the recent recovery in the ruble, the international effort to isolate Russia is taking a steep toll on its economy. The nation's gross domestic product will shrink 15% this year, the Institute of International Finance recently forecast. To put that in perspective, U.S. GDP fell by 3.5% in 2020, when the pandemic caused much of the nation's economy to shut down.
"Russia has not had a recession of this size since the 1990s," Elina Ribakova, the IIF's deputy chief economist said in a report. "This is an unprecedented shock to the Russian economy."
Russia has banned foreigners from selling any assets they own in the country. That has prevented some Western companies that have stopped doing business in Russia from selling their properties, factories or other assets in Russia.
"There are 400 companies that have said they are pulling out of Russia and who would like to sell assets but can't," Foley said.
Russia has also declared that "unfriendly" nations must pay for energy exports in rubles, a measure created to support the currency, But the edict may not have much of an effect, according to a new analysis from the Federal Reserve Bank of St. Louis.
The bigger issue is Europe's dependence on Russian energy, Foley said. While the E.U. has agreed to ban Russian coal, it has yet to agree on a sweeping embargo on oil and natural gas that would deliver a bigger hit to Russia's economy. That's largely because a ban on Russian energy imports could spur a recession in Europe.
In the meantime, Europe's ongoing imports of Russian energy are "getting Russia quite a lot of rubles ... and that means they are able to soften the blow to the economy," she said.
source: https://www.cbsnews.com/news/ruble-rebound-price-after-sanctions/