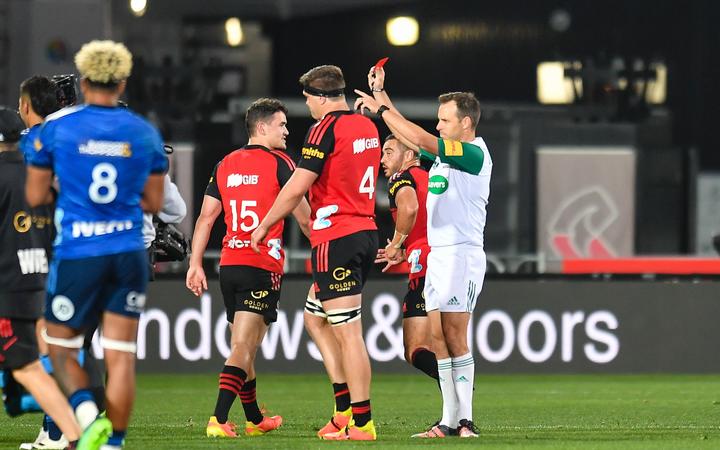 Barrett has been suspended for 4 weeks after pleading guilty to a high tackle in his side's 27-23 loss to the Blues on Friday night.

He was shown a red card in the 46th minute for his hit on Blues prop Alex Hodgman.

The incident wasn't seen by the referee, but the TMO then instructed the referee to take a look at it and Barrett was sent off.

With an initial entry point of six weeks the judiciary reduced his ban to four because of mitigating factors including the Player's acceptance of foul play, his expressed remorse and pleading guilty at the first available opportunity. He was not entitled to the full 50% reduction due to a prior similar offence.

Barrett is suspended up to and including the 13th of May and will therefore miss games against the Rebels, Waratahs, Force and Brumbies.

Josh Dickson and Asafo Aumua have both been suspended three weeks following incidents in the Highlanders-Hurricanes clash in Dunedin on Saturday night.

Dickson was sent off in the 19th minute after connecting with Hurricanes prop Tevita Mafileo's head with his left shoulder.

The judiciary upheld the red card but his clean record, remorse and acceptance of foul play resulted in his suspension reduced from six weeks to three.

He'll miss games against the Brumbies, Fijian Drua and the Reds.

Aumua pleaded guilty to reckless play late in the game when his shoulder connected with Gareth Evans head in a maul.

It wasn't deemed dangerous at the tie by the referee but Evans left the field for a head injury assessment.

The judiciary found that contact with the head warranted a starting point of six weeks but again Aumua's clean record and acceptance of guilt allowed the ban to be reduced to three weeks.

He'll miss games against the Reds, Brumbies and Fijian Drua.

The suspensions follow a push by match officials this year to take particular attention to dangerous play involving a players head.