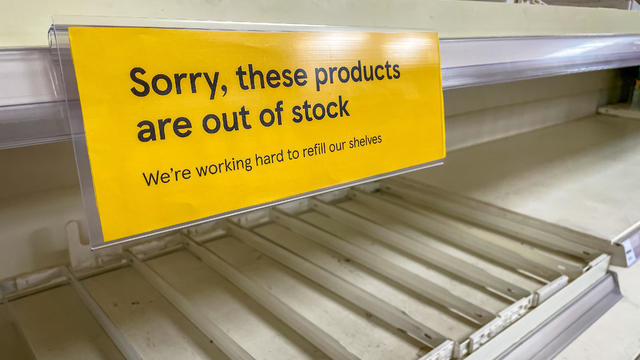 Grocery shoppers have likely noticed an empty shelf of late where household staples like baby formula or sunflower oil are normally on display. Many online buyers are also coming up empty on everything from packaged goods to clothes and tools.
About 31% of grocery products consumers browsed were out of stock in the first week of April, according to Datasembly, a research firm that tracks grocery and retail pricing. That's up from 11% at the end of November 2021. Out-of-stock notices were even more common in Connecticut, Delaware, Montana, New Jersey, Rhode Island, Texas and Washington, where they surpassed 40%.
Compounding the challenge for consumers, Americans are also shelling out more money for many of the same goods they're used to buying. Grocery prices were up 9% in March from a year ago, according to Adobe. Egg prices are up 56%, according to the Department of Agriculture, driven up by drought conditions in the U.S., a bird flu epidemic and even the war in Ukraine.
Other items are also up sharply. The cost of baby formula products has jumped as much as 18% over the last year amid a nationwide shortage. Pet supplies have risen 7%. Overall, inflation in March rose 8.5% from a year ago — the highest since 1981.
Generally, the availability and price of goods depends on three main components: raw materials, human labor and logistics, like shipping and transportation. If any of these links is weak, or breaks down as they have during the pandemic, it can disrupt the entire supply chain.
"If any part of the supply chain is disrupted because crops are not coming through, parts are not in stock or trucks are not available, that leads to disruption, which means supply chains will have shortages," Achal Bassamboo, a professor of operations at the Kellogg School of Management at Northwestern University, told CBS MoneyWatch.
Ongoing supply problems due to COVID-19 and more recently Russia's war on Ukraine, which has limited the availability of certain crops, mean the complex chain linking suppliers, manufacturers, shippers and retailers to consumers remains fragile.
Another basic factor is leading to product shortages and higher prices: rebounding consumer demand as the U.S. learns to live with the virus.
"It's harder to get stuff — there is less raw material, but consumers are also buying more because there is a lot of money out there and people haven't been paying as much for services," said Joel Beal, CEO of Alloy, a tech platform that helps companies track products and manage inventory. "That's leading to higher levels of products being out of stock than we have had in decades for a lot of different goods. People want more than they've ever had, and companies can't manufacture enough because they can't get the raw materials to do it."
"Every customer we talk to says we have a shortage of this, we have a shortage of that," he added.
Given the limits on how much manufacturers can produce, retailers end up competing for the same goods.
"When you have less inventory than people are requesting, brands have to make decisions about who is going to get the limited inventory. You go on allocation, and certain retailers will be disproportionately impacted," Beal said.
Brands will sell to buyers who are willing to pay full price, meaning shoppers can expect to find more out-of-stock notices among discount retailers compared to other stores.
"Larger retailers like Walmart, Amazon, Safeway and Kroger, because they have disproportionate power with suppliers, they are buying larger quantities, so you'll see those players do better and have fuller shelves compared to the smaller payers that you sell to when you have excess inventory," he said.
source: https://www.cbsnews.com/news/product-shortages-inflation-supply-chain-2022/