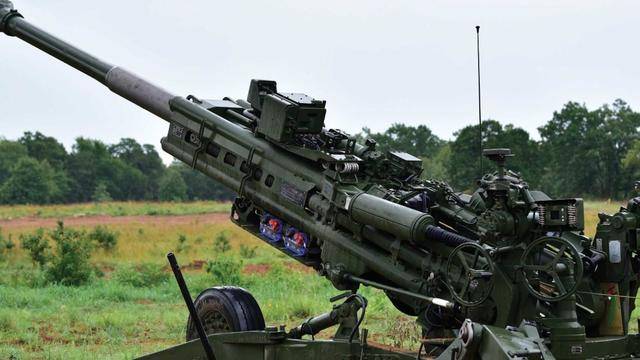 The first shipments of the latest round of U.S. military assistance to Ukraine, which includes heavier weapons systems, started arriving in the region over the weekend, according to the Pentagon.
The recently approved $800 million in security assistance includes Howitzer artillery systems, 40,000 artillery rounds, armored personnel vehicles and other weapons.
A senior U.S. defense official said Monday that four flights of shipments from the assistance package arrived in the region over the weekend with a fifth expected in the next 24 hours. The official did not detail which weapons from the recent package landed in the region first.
Pentagon spokesperson John Kirby in a press briefing said the Defense Department expects to start training Ukrainian trainers outside of Ukraine on how to use the U.S.-provided Howitzers in the coming days. The Ukrainian trainers will then return to Ukraine and train more troops.
According to Kirby, the training isn't expected to take long since the Ukrainians already know how to use artillery systems and merely need to familiarize themselves with the American systems. The Ukrainians use 152mm artillery systems, and the U.S. is providing 155mm artillery systems.
The Russians have refocused on the Donbas region after failing to control Kyiv. The Pentagon assesses they are now conducting "staging operations," which involves "setting the conditions for more aggressive, more overt and larger ground maneuvers" in the east, according to Kirby.
The impending fight in the east is expected to rely more on armored vehicles and artillery systems than in the north since the terrain in southeastern Ukraine is more flat and wide open.
"The artillery is a specific item the Ukrainians asked for because of the specific fighting they expect is going to occur in the Donbas," Kirby said on Monday. "And we know the Russians also believe the same thing because we see them moving artillery units into the Donbas as well."
The recently approved $800 million in assistance to Ukraine also includes Switchblade drones, more Javelin anti-tank missiles, and armored personnel carriers. Overall, the U.S. has provided $2.6 billion in security assistance to Ukraine since Russia invaded at the end of February.
CBS News reporter covering the Pentagon.
source: https://www.cbsnews.com/news/ukraine-howitzers-u-s-weapons-assistance-arrives/