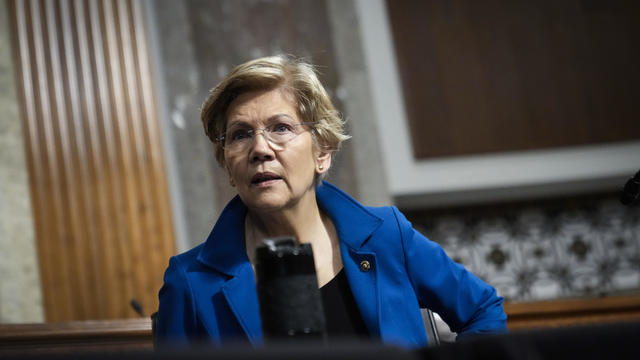 As millions of Americans scramble to file their taxes at the last minute, Senator Elizabeth Warren is asking why it isn't easier to do so for free.
The Democrat from Massachusetts on Monday wrote to the CEO of Intuit, maker of America's most widely used tax software, accusing the company of "unethical and potentially illegal practices that cost American taxpayers billions of dollars."
Warren charges the maker of TurboTax software with lobbying against government efforts to create a truly free tax return option for Americans while sabotaging the public-private partnership that allows some Americans to file taxes without paying, called Free File.
"The Free File program has been a failure, scamming taxpayers into paying for services that should be free," Warren said in the letter, co-signed by Reps. Katie Porter and Brad Sherman and first reported by The Verge.
TurboTax is a founding member of Free File, a partnership between the IRS and commercial tax-preparation companies, that ostensibly allows any taxpayer making less than $73,000 to file their tax returns for no cost. However, less than 3% of taxpayers used it in the 2020 tax year, IRS figures show.
An audit by the Treasury Inspector General for Tax Administration found that at least 14 million Americans paid for tax prep who didn't need to, in part because tax-prep companies hid their free products from eligible taxpayers.
In previous years, TurboTax actively steered low-income Americans into paid products by coding its website to hide its "Free File" option from search engines, as ProPublica has reported. It also actively promoted its products as free, giving them names like "Free Editions," only to then charge some taxpayers when they reached the end of the form. (Last year, TurboTax left the Free File Alliance.)
The Federal Trade Commission accused Intuit of running an illegal bait-and-switch last month and sued the company in California.
Intuit did not immediately respond to a request for comment on Warren's letter.
The company previously said it would "vigorously challenge" the FTC's lawsuit. In a lengthy blog post, Intuit said it was always following the law when it came to Free File.
"Far from steering taxpayers away from free tax preparation offerings, our free advertising campaigns have led to more Americans filing their taxes for free than ever before and have been central to raising awareness of free tax prep," Kerry McLean, Intuit's general counsel, said in a company post.
The letter from Warren, Porter and Sherman also asks Intuit to account for its lobbying activities, and alleges that the company is profiting from a too-cozy relationship with the government by hiring former regulators to work as lobbyists.
For instance, Dave Williams, a former IRS official who was a "top negotiator on the Free File program" later went to work for Intuit, according to the letter. After the FTC sued Intuit, the company hired Jon Leibowitz, a former chair of the Federal Trade Commission, to defend it, Warren noted.
source: https://www.cbsnews.com/news/tax-return-intuit-free-file-elizabeth-warren/