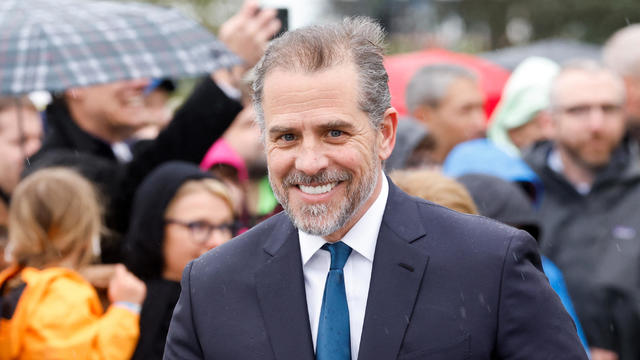 Prosecutors investigating Hunter Biden subpoenaed documents from a paternity lawsuit that included tax records for the president's son, according to documents and an attorney involved in the matter.
"They wanted every record relating to Hunter Biden we had," Clint Lancaster told CBS News. Lancaster represented Lunden Roberts, a woman who filed suit against Hunter Biden in 2019 alleging he was the father of her child.
A December 2020 subpoena from the U.S. Attorney's office in Delaware, obtained by CBS News, requested all documents "regarding [Hunter] Biden's income, assets, debts, obligations, and financial transactions… and all personal and business expenditures." The request specified January 2017 to the present.
The subpoena also requested a wide range of tax documents pertaining to Hunter Biden.
"All federal, state, local and foreign tax documentation related to Biden," the subpoena reads, "including but not limited to, IRS Forms 1099, income and payroll tax returns, state tax returns, and amended tax returns."
Hunter Biden's personal and business conduct have been the subject of scrutiny — and the target of Republican political attacks — since the earliest days of the 2020 presidential campaign.
The move by federal authorities to obtain these records offers a new, if narrow, glimpse into the long-running investigation into the president's son — a probe that began as a tax inquiry several years ago.
Lancaster told CBS News that in the fall of 2021, the Assistant U.S. Attorney in Delaware, Lesley Wolf, traveled to his Arkansas law office, joined by at least two federal agents, one from the FBI and the other an IRS enforcement agent. Lancaster said he and his client spent about half a day answering questions about Hunter Biden and his business practices.
Lancaster said that in the meeting, investigators asked for information about several companies affiliated with Hunter Biden, including Rosemont Seneca Partners, a firm where he worked for several years.
The line of questioning tracks with a separate 2019 federal subpoena from the U.S. Attorney's office in Delaware. The subpoena, obtained by CBS News, sought "all records, documents and accounts pertaining to all financial/banking transactions" between 15 business entities and Hunter Biden, the president's brother James, as well as two business partners dating back to 2014, when Joe Biden was vice president.
Lancaster said that during the paternity suit Hunter Biden had supplied an "affidavit of financial means," which detailed his finances through income statements and a breakdown of monthly expenses.
Lancaster said the tax records he and his client supplied overlapped with the time period of Hunter Biden's foreign business dealings.
Roberts testified before a Delaware grand jury in February of this year, according to her lawyer.
Roberts declined to comment to CBS News.
An Arkansas court filing from November 2019 states, "DNA testing has established with scientific certainty" that Hunter Biden is the father of Roberts' child. The child is believed to be around 3 years old today. The paternity case was settled in 2020. Some of the records in the case are under seal.
The U.S. Attorney's office has not commented on the status or objectives of their investigation into Hunter Biden. The office also declined to answer CBS' questions about Lancaster's account.
A retired federal prosecutor told CBS News the actions described by Lancaster suggest an aggressive effort by investigators working on behalf of the U.S. Attorney in Delaware.
"The whole thing is as serious as a heart attack," says Harry Litmann, who spent two decades at the Department of Justice, including as a U.S. Attorney. "People are going in and out of the grand jury. They are trying to plumb the depths. They're playing hardball."
In recent weeks, it has become clear that the federal investigation into Hunter Biden's business practices is broad. According to multiple sources, the probe is exploring whether Hunter Biden and his associates violated tax, money laundering and foreign lobbying laws.
The New York Times reported last month that Hunter Biden has "paid off a significant tax liability."
The case is being led by the U.S. Attorney in Delaware, David C. Weiss. Weiss was appointed by former President Trump and kept on by the Biden administration, in part because they did not want to appear to be interfering in the probe by replacing him with a Democratic appointee.
The White House has referred questions to the Department of Justice.
"I'm a spokesperson for the United States," White House press secretary Jen Psaki said last month responding to questions about Hunter Biden. She directed questions about the investigation to the Justice Department, saying of the president's son, "He doesn't work in the government."
A lawyer for Hunter Biden has not responded to CBS News.
Catherine Herridge is a senior investigative correspondent for CBS News covering national security and intelligence based in Washington, D.C.
source: https://www.cbsnews.com/news/hunter-biden-documents-paternity-tax-returns/