Democratic Senate candidate to appeal decision to keep her off ballot 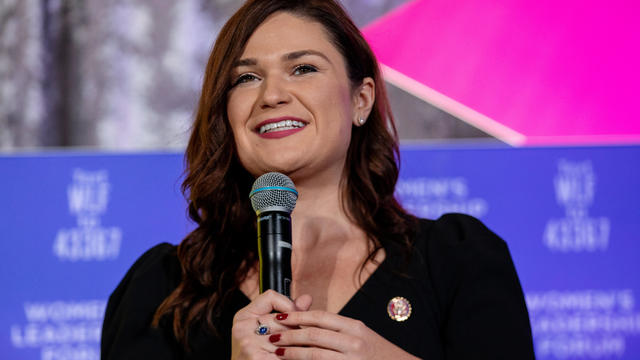 Iowa Democratic Senate candidate Abby Finkenauer announced Monday that she will appeal a judge's decision that she did not have enough signatures to qualify for the primary ballot.
Finkenauer, a former one-term congresswoman who lost her bid for reelection in 2020, is one of the Democrats mounting a longshot bid to unseat seven-term Republican Senator Chuck Grassley.
Two Iowa Republicans challenged Finkenauer's signatures after she submitted her paperwork to the secretary of state's office in March. They alleged that she had failed to obtain at least 100 eligible signatures from at least 19 counties in Iowa.
The Iowa secretary of state's office initially accepted Finkenauer's signatures when they were submitted.
The Republicans who filed the challenge objected to three signatures, one from Allamakee County and two from Cedar County. Last month, a state panel rejected that challenge and determined Finkenauer had sufficient signatures to qualify for the ballot.
Judge Scott Beattie found that the state panel's decision to reject the challenge was wrong because the signatories had failed to include the date with their signatures when filling out the petition, as state law requires. He said that the statute doesn't allow the court to infer the date based on the dates listed by other signatories on the petition.
Beattie's decision to reverse the state panel's ruling put Finkenauer below the 100 signatures that she would need from those counties in order to qualify for the ballot.
"The Court takes no joy in this conclusion," Beattie wrote in his decision. "This Court should not be in the position to make a difference in an election, and Ms. Finkenauer and her supporters should have a chance to advance her candidacy. However, this Court's job is to sit as a referee and apply the law without passion or prejudice. It is required to rule without consideration of the politics of the day."
In addition to the signatures required in the counties, campaigns have to collect at least 3,500 total signatures. Finkenauer's campaign said they submitted more than 5,000 signatures from Iowans supporting her candidacy.
Finkenauer blasted Beattie's decision, calling it "deeply partisan," and said that she plans to appeal to the Iowa Supreme Court.
"We refuse to back down in the face of these partisan attacks," Finkenauer said in a statement. "We are confident that we have met every requirement to be on the ballot, and we will not stop fighting back against this meritless attack that seeks to silence the voices of tens of thousands of Iowans."
Iowa's primary is scheduled for June 7 and overseas absentee ballots have to be mailed to voters by April 23. A spokesperson for the Iowa secretary of state said vendors have assured the state that ballots can be printed for overseas voters if the Finkenauer issue is "reached on or about Friday, April 15."
Mike Franken, a retired Navy admiral, and Glenn Hurst, a doctor, are also seeking the Democratic nomination.
CBS News political reporter.
source: https://www.cbsnews.com/news/iowa-democratic-senate-candidate-to-appeal-judges-decision-to-keep-her-off-ballot/