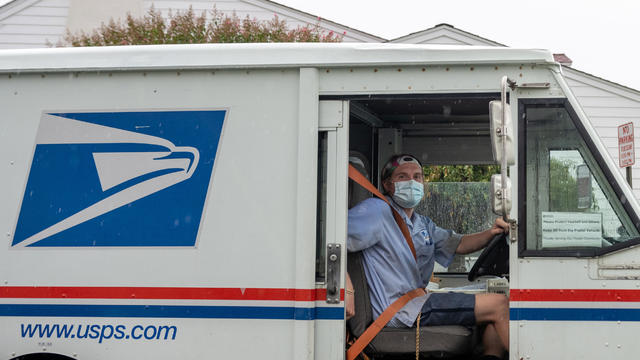 The U.S. Postal Service said on Wednesday that it wants to increase postage rates this summer — less than one year after it last increased the price for a first-class Forever stamp. The new price would rise to 60 cents from its current 58 cents, which the postal service said represents a hike that's lower than the current rate of inflation.
The higher stamp price would take effect on July 10, or 11 months after its postage rate increase in August, when stamps went from 55 cents to 58 cents. That means customers would be paying 9% more for postage compared with prices less than a year ago, or above the 7.9% rate of inflation in February.
It's not only that Americans are paying more for postage — they're also getting less for their money, said Paul Steidler, senior fellow at the conservative-leaning Lexington Institute and an expert on the postal service. The USPS has cut its delivery standards during the past year, part of Postmaster General Louis DeJoy's plan to put the money-losing agency back on a path to profitability.
But the postal service isn't even meeting its lower delivery standards, Steidler said. "It's one thing to have price increases, but it's another to have absolutely abysmal service accompanying that price increase. The price increase is not in the best interest of the American people."
The announcement comes on the same day that President Biden is scheduled to sign the Postal Service Reform Act of 2022 into law. That legislation will provide $107 billion in direct and indirect support for the USPS, such as by allowing future retirees to enroll in Medicare and end a requirement that the agency pre-fund workers' health care benefits for the next 75 years.
The Postal Service said the price increase will help the agency implement DeJoy's 10-year plan, known as the "Delivering for America" plan. USPS also pointed to inflation and increased operating expenses as a reason for its rate hike.
The agency said it has proposed the rate hike to the Postal Regulatory Commission (PRC), the federal regulator that oversees the postal agency, but the PRC only issues advisory opinions. In other words, if the USPS wants to increase the rates, it will move forward with it regardless of the PRC's response, Steidler noted.
source: https://www.cbsnews.com/news/usps-postage-rate-increase-louis-dejoy/