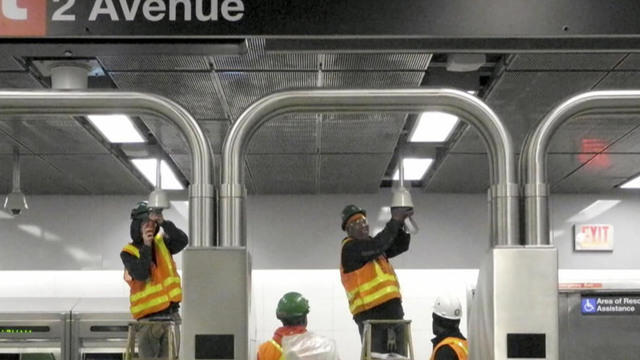 Bus stations and subways in America are blanketed by security cameras. But New York's transit agency was warned multiple times in the past five years that just having the cameras isn't enough.
The problem became evident Tuesday after a gunman opened fire on a Brooklyn subway train during rush hour — and remained at large a day later. The manhunt has been hampered by what Mayor Eric Adams called an apparent "malfunction" with the security cameras at the station. None of the cameras that could have caught the incident were working at the time.
In a pair of inspections from 2018 and 2019 reviewed by CBS News, state officials warned New York City's Metropolitan Transportation Authority that its subway system's security cameras were at risk of malfunctions. They found that the MTA failed to ensure preventative maintenance and timely repairs on thousands of the cameras.
The MTA said it was taking "aggressive" steps.
In an interview Wednesday on "CBS Mornings," MTA CEO Janno Lieber said crews had been working on an apparent "server problem" with at least one of the cameras near a turnstile at the station.
"But the bigger issue is there's so much video evidence from all of the stations on this line that there are images that are going to be found," he said, pointing out that the "enormous range" of available security footage includes videos from about 2,500 cameras on the subway line where the shooting took place.
Ten of the victims in Tuesday's attack suffered gunshot wounds while 13 were treated for other injuries, including smoke inhalation from a smoke bomb that the shooter tossed during the attack, authorities said. Police have identified Frank James, of Philadelphia, as a suspect in the case.
Former FBI agent Mike German said he was not surprised to hear that cameras failed during the incident.
"It's very easy after an event that's horrifying and scary to the public for policymakers to reach for that silver bullet solution, 'We'll put cameras in all of the subway stations,' but that initial expense doesn't necessarily provide or explain all of the resources that will have to go into that kind of surveillance," he told CBS News congressional correspondent Scott Macfarlane.
German said cameras are a challenge for many U.S. transit systems because they require regular and sophisticated maintenance.
Congressional sources tell CBS News a group of dozens of U.S. House members were already getting ready to request millions of dollars later this month to pay for cameras and other types of security equipment, "harder infrastructure" and surveillance training to prevent attacks at U.S. rail stations.
Rep. Abigail Spanberger, a Virginia Democrat and former CIA agent, said equipment alone won't stop a threat.
"Maintenance is important. If there's cameras, where is that video uploaded? Where is it stored? Who is reviewing it?" she said. "When we're looking at security investments, they do require maintenance and they do require continued investment."
Last year, the MTA announced it had cleared a milestone by installing security cameras in all 472 subway stations in the city.
Lieber said New Yorkers should feel safe taking the subway.
"New Yorkers just keep bouncing back, and the subway is the fabric of New York," he said, noting that the city recovered from tragedies like 9/11 and Superstorm Sandy. "Nobody is going to give up our public space that defines New York, that makes New York possible. That's what the subway is."
source: https://www.cbsnews.com/news/subway-shooting-brooklyn-nyc-mta-cameras-malfunction/