As mom of 14 faces execution, Texas governor pressured to stop it 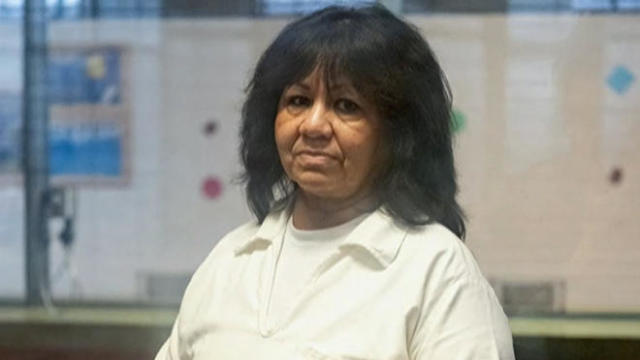 SAN ANTONIO - The governor of Texas is under pressure to stop the planned execution of a mother convicted of killing her child. The woman, Melissa Lucio, a mother of 14, was found guilty back in 2008 in the death of her 2-year-old daughter, Mariah.
Lucio's lawyers say the evidence shows it was a tragic accident. She is scheduled to be put to death on April 27. If the execution goes ahead, she would be the first Latina to be executed in the state of Texas.
Now, her family, more than 80 state lawmakers from both parties, and even some of the jurors who convicted her say she should live. Among them is one of her sons, John Lucio. During an emotional press conference he stated, "I don't want my mom to be executed."
Another of Lucio's children, Bobby Alvarez, carries the words of his mom tattooed on his chest: "I'll always be with you, and here I'll always stay." He told "CBS Mornings" correspondent Lilia Luciano that he decided to get the tattoo, "because, you know, it's close to my heart."
Bobby was seven when Mariah died. He said she fell down a flight of stairs, and died two days later. "It was an accident," he said. "If they go through with it, they'll be killing an innocent woman."
That's what Lucio told first responders and the police. But when the medical examiner saw the toddler's body covered in bruises, it was ruled child abuse, and investigators zeroed in on Lucio.
In recordings of an interrogation, Lucio – who was pregnant with twins at the time – is heard denying guilt.
"Are you a cold-blooded killer?" "No, I'm not." "Or were you a frustrated mother who just took it out on her for whatever reason?" "No."
Lucio endured more than five hours of interrogation in which she denied killing Mariah, said Vanessa Potkin, director of special litigation at The Innocence Project.
"Over 100 times, she asserted her innocence," said Potkin. "They refused to listen to her, sending the clear message that this interrogation wasn't going to stop until she told the officers what they wanted to hear."
And she did, saying she spanked the child, but never admitting to the use of deadly force. "I hit her like this," she demonstrated by spanking a doll, sealing her fate.
"Her so-called confession was the result of highly coercive interrogation tactics," said Potkin, "some of which are so coercive that they're no longer used today."
Experts on false confessions who reviewed the interrogation tapes say Lucio was especially vulnerable, as a victim of child sexual abuse and later domestic violence, developing defense mechanisms.
They wrote: "[A] history of trauma significantly reduces the resilience of the trauma victims to cope with interrogative pressure. … Ms. Lucio's passive and apparently flat demeanor … is best explained by her history of repeated sexual, physical, and emotional abuse since childhood."
Child Protection Services records show Lucio was neglectful, but not violent against any of her children. But jurors didn't hear testimony from any of Lucio's kids.
Tivon Schardl, supervisory assistant federal public defender in the Capital Habeas Unit in Austin, and part of Lucio's current defense team, said the jurors were not given the full picture: "There's been just a concerted effort to keep this evidence from being considered."
"Evidence that could have been exculpatory?" asked Luciano.
"Oh, it's definitely exculpatory," Schardl replied.
The medical examiner concluded Mariah died from a blow to her head. But today, multiple expert pathologists agree Mariah could have suffered a head injury from a fall, leading to a disorder that causes extreme bruising.
"It looks from the outside like somebody has gotten, say, punched," said Schardl. "It's very common to be mistaken for abuse if you don't look for the signs."
In 2019 the 5th U.S. Circuit Court of Appeals ruled Lucio had been deprived of "her constitutional right to present a meaningful defense," and overturned her conviction.
But in 2021, the full court upheld her conviction for procedural reasons – a technicality.
Luciano asked Bobby Alvarez, "What would it mean to you to have your mom back with you?"
"Everything," he replied. "You know, it's my mom. I even told her myself that I consider her my best friend."
Now, the power to save Lucio lies in the hands of Texas' Republican Governor Greg Abbott, the Board of Pardons and Parole, and the current Cameron County District Attorney, Luis V. Saenz, whose office said in a statement to CBS News: "A jury of (Lucio's) peers rendered to her a verdict. … We cannot allow the rule of law to be suspended and substituted by a court of public opinion."
But at least four of those jurors now agree Lucio should get a new trial, given the new evidence and testimony they didn't see.
She also has the support of an unprecedented bipartisan coalition of 87 Texas lawmakers. State Rep. Jeff Leach said, "As a conservative Republican myself who has long been a supporter of the death penalty in the most heinous cases, I have never seen – I have never seen – a more troubling case than the case of Melissa Lucio."
As Lucio's scheduled execution date draws near, Bobby Alvarez is soaking up every moment he has with his mother, while holding onto that small speck of hope. However, even if Lucio's death penalty is commuted, she still isn't going home anytime soon.
"Right now, what I have is my family," Alvarez said. "That is what I cherish the most. So, I really try not to think about the future, because right now I have what I want."
source: https://www.cbsnews.com/news/melissa-lucio-execution-texas-mother-family-pleads-stay-of-execution/