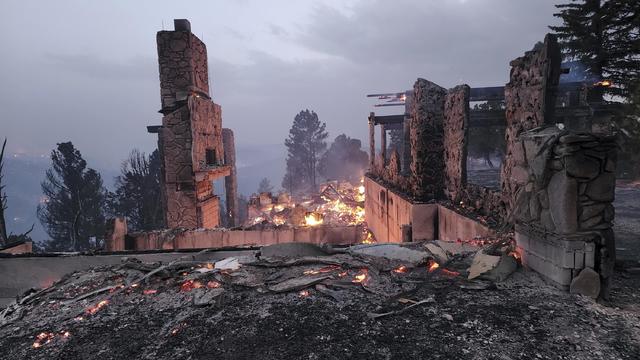 A fast-spreading wildfire in New Mexico has left two people dead and more than 200 homes destroyed or damaged, fire officials said. The McBride Fire in Ruidoso, New Mexico, has burned at least 5,736 acres as of midday Thursday and is 0% contained.
On Wednesday, police and fire officials located the remains of an elderly couple who tried to evacuate due to the wildfire, according to the New Mexico Department of Public Safety. A day earlier, local firefighters responded to a structural fire at their address, and later that evening officials received information about the elderly couple who was unaccounted for by family members.
Authorities are working to identify the deceased couple and determine the cause and manner of death.
New Mexico Governor Michelle Lujan Grisham said the fatalities are "absolutely heartbreaking."
"I am keeping their loved ones and the entire Ruidoso community in my prayers," Grisham said on Twitter.
The McBride Fire began on Tuesday and quickly spread into residential areas, according to the United States Forest Service's information management system InciWeb. The wildfire's cause is still under investigation.
Strong winds are continuing to spread the fire northeastward. At least 207 homes have been destroyed or damaged in its path, a public information officer assigned to the McBride Fire said Thursday at a press conference. With increasingly gusty winds forecast, fire activity is expected to increase throughout the afternoon, the city of Ruidoso stated on its municipal website.
Mandatory evacuation orders have been issued and certain roads in the area are closed. Residents are encouraged to prepare belongings should they need to evacuate quickly, watch for downed power lines and trees, and expect electricity and gas outages.
New Mexico officials also warned of another nearby fire, called the Nogal Canyon Fire, which is burning at 345 acres with 4% of it contained. Six homes have been destroyed by the blaze and evacuation orders are in effect, a fire spokesperson said Thursday.
Tori B. Powell is a breaking news reporter at CBS News. Reach her at [email protected]
source: https://www.cbsnews.com/news/new-mexico-wildfire-deaths-damage/