Meadows had been warned of possible Jan. 6 violence, official says 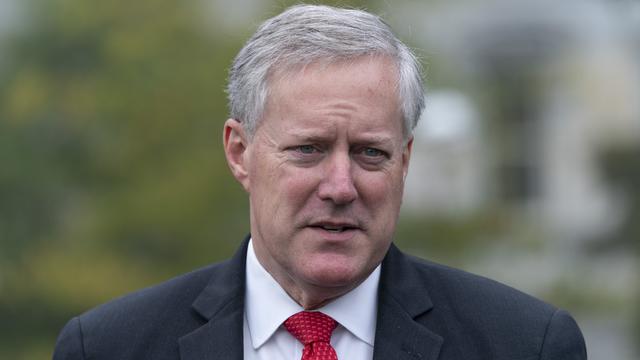 A former White House official told the House committee investigating the January 6, 2021, insurrection at the U.S. Capitol that former President Donald Trump's chief of staff, Mark Meadows, had been advised of intelligence reports showing the potential for violence that day, according to transcripts released late Friday night.
Cassidy Hutchinson, who served as a special assistant in the Trump White House, told the committee "there were concerns brought forward" to Meadows ahead of the riot but it was unclear what Meadows did with that information.
"I just remember Mr. Ornato coming in and saying that we had intel reports saying that there could potentially be violence on the 6th," Hutchinson said, presumably referencing Anthony Ornato, a senior Secret Service official. "And Mr. Meadows said: 'All right. Let's talk about it.'"
The filing Friday also reinforced how certain Republican members of Congress were deeply involved in White House discussions about overturning the election in the months leading to the deadly insurrection.
Hutchinson describes several calls involving Meadows and members of the far-right House Freedom Caucus in late November and early December in which participants discussed what Vice President Mike Pence's role could be on January 6, besides the ceremonial role he was required to play.
On those calls, according to Hutchinson, were representatives from Trump's legal team, including Rudy Giuliani, Jenna Ellis and Sidney Powell, as well as Reps. Jim Jordan and Scott Perry.
The filing from the committee is in response to a lawsuit Meadows brought in December in Washington's federal court against the committee and House Speaker Nancy Pelosi.
The lawsuit asked a judge to invalidate two subpoenas that Meadows received from the committee, alleging they were "overly broad and unduly burdensome." The lawsuit went on to accuse the committee of overreaching by issuing a subpoena to Verizon for his cell phone records.
Shortly after the complaint was filed, the select committee sent a contempt of Congress charge against Meadows to the House floor, where it passed on a near-party-line vote. It was the first time the chamber had voted to hold a former member in contempt since the 1830s.
While an earlier contempt referral against former Trump adviser Steve Bannon resulted in an indictment, the Justice Department has been slower to decide whether to prosecute Meadows.
The criminal case against Meadows is more complex than that presented against Bannon, in part because Meadows had begun to cooperate with the committee, even providing documents to the nine-member panel.
Meadows' attorney, George Terwilliger, has previously defended his client by noting that due to Meadows' willingness to turn over records, he should not be compelled to appear for an interview. Terwilliger did not immediately return an email seeking comment Friday night.
source: https://www.cbsnews.com/news/mark-meadows-january-6-capitol-violence-warning/