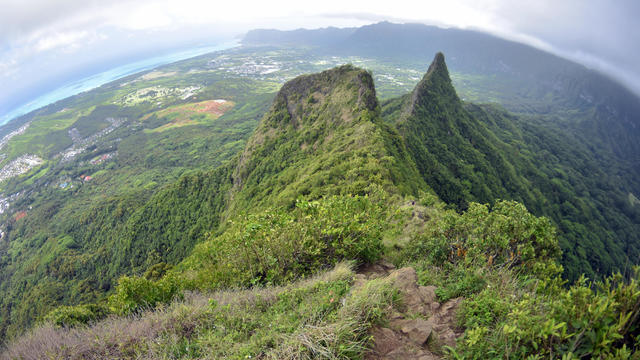 A visitor to Hawaii fell off a cliff and died Wednesday while hiking a ridge line trail near a mountain summit on the east side of Oahu. The 30-year-old traveler fell 250 feet while hiking near the third peak of Mount Olomana, the Honolulu Star-Advertiser reported Thursday.
The name and hometown of the victim was not immediately released.
The Honolulu Fire Department said the man had been hiking with three others, including a Hawaii resident.
The trail is a treacherous, narrow path that snakes along steep cliffs to a series of peaks.
Another tourist fell from the same trail days earlier and suffered a serious head injury. Local rescue crews have been dispatched to the trail five times this year and responded to 13 calls in 2021, according to a fire department spokesperson.
At least five others have died on the trail since 2011 -- including  24-year-old
Nathan Stowell. In 2018, KGMB-TV reported that Stowell fell about 400 feet while hiking Olomana Trail on Easter Sunday while trying to retrieve a fallen hat.
The trail is under the jurisdiction of the Department of Land and Natural Resources but the agency does not list it on any state websites. The trail has no official signage and hikers usually traverse the cliffs by using a series of unofficial ropes.
"We don't actively manage the trail, nor do we recommend that people traverse it," said Department of Land and Natural Resources spokesperson Dan Dennison.
KGMB-TV reported that officials have tried to stop the spread of online videos luring people to the steep ridges of the mountain range.
"I've seen in that there seems to be a spike in either injuries or in this case fatalities. More and more it's in areas that are not managed, not sanctioned, out-of-bounds kind of areas," state Parks Administrator Curt Cottrell told the station in 2018.
source: https://www.cbsnews.com/news/tourist-dies-250-foot-fall-cliff-hawaii-mount-olomana/