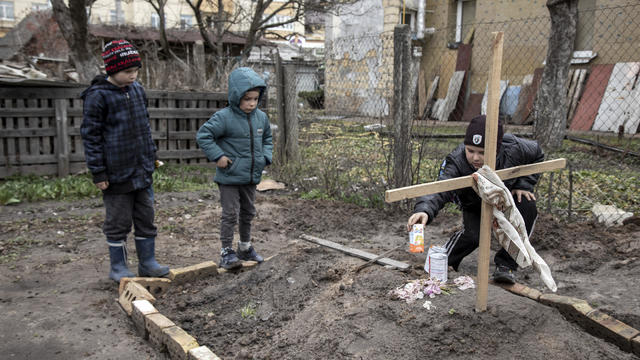 Kyiv — Global shock and anger over the brutality of Russia's war on Ukraine was still building Tuesday when Ukrainian President Volodymyr Zelenskyy addressed the United Nations Security Council on the atrocities discovered on the outskirts of Kyiv. Ukraine says mass graves and bodies in the streets in the town of Bucha tell a story of indiscriminate murder, and many world leaders — including President Joe Biden — are calling it a war crime.
CBS News correspondent Debora Patta and her team visited Bucha to see for themselves the evidence of killings that Russia has dismissed as "fake."
NOTE: Some of the images in the video above and in the article below are disturbing.
Moscow claimed on Monday that the deaths occurred after its forces left the area, and that Russian soldiers never harmed a single civilian, but an analysis of satellite photos, first reported by the New York Times, shows bodies were strewn across Bucha's streets and yards long before Russian forces beat a hasty retreat late last week.
Patta said that when she and her team visited the town, they saw evidence of atrocities: Civilians shot in the head with their hands bound; at least one resident apparently cut down by Russian tank fire while riding down the street on a bicycle; mass graves filled with nearly 300 bodies.
There is a trail of destruction and death carved through Bucha, and Patta said it is exactly what war crimes look like.
Having reported from many conflict zones and bearing witness to some of the most brutal atrocities of this century, Patta said what she found in Bucha was among the worst she had ever seen.
"I personally saw evidence of war crimes," Patta reported on Tuesday. "These stories cannot be staged, and the overwhelming grief I have witnessed cannot be manufactured."
Patta and her team saw a couple react as they spotted one victim in particular in a mass grave. They thought they'd recognized their son's arm, but it was not him. Their grim search continued.
In one building, the CBS News team found the body of a man who appeared to have been blindfolded, with his hands tied behind his back. The rudimentary safety helmet he had on was no defense against a bullet to the head.
Yuri, a resident, told Patta he'd seen Russian soldiers bring the man at gunpoint into the building where he was killed.
Russian troops had set up camp in a courtyard outside Yuri's apartment block. Their presence is still felt in the discarded beer bottles, empty munition boxes and overturned cars they left behind.
On the first day of the invasion, Russian paratroopers spilled onto the tarmac at the nearby airport in Hostomel. Not much is left of that airport, where one of the most significant battles of the war was fought. Ukraine's defenders stopped the Russians there as they tried to take over the country.
The airport has been reduced to an apocalyptic scene, with the crumpled, melted frame of the world's largest airplane serving as testament to the fierce fight that stopped Russian forces from establishing a supply line there, but could not stop their invasion of nearby Bucha, and the horror that followed.
Tanya Nedashkivs'ka found her husband dead among a pile of bodies at the foot of a basement staircase.
"I'm begging you, do something," she said through sobs. "Make peace so no-one ever grieves again… everyone just wants to live."
The tears of a widow demanding to be heard, imploring the world not to look away.
source: https://www.cbsnews.com/news/russia-ukraine-war-crimes-cbs-news-sees-evidence-atrocities-bucha-massacre/