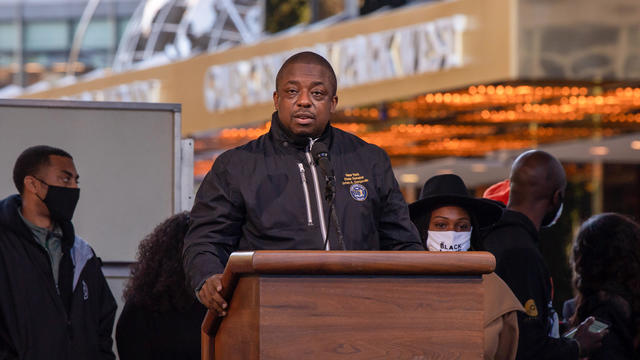 Washington — New York Lt. Gov. Brian Benjamin was indicted on federal charges for his alleged role in a campaign finance fraud scheme on Tuesday, with prosecutors saying he sought to use his authority as a state lawmaker to steer a state-funded grant to a nonprofit organization in exchange for campaign contributions to his failed campaign for New York City comptroller.
The indictment unsealed in federal court in Manhattan details the scheme Benjamin allegedly engaged in with a real estate developer who controlled the nonprofit while he was a member of the New York state senate. Benjamin faces five counts, including bribery, wire fraud and falsification of records.
Federal prosecutors are set to announce the charges in a press conference at noon. The New York Times reported Benjamin has already surrendered to authorities and is expected to appear in court in Manhattan later Tuesday.
"Benjamin abused his authority as a New York state senator, engaging in a bribery scheme using public funds for his own corrupt purposes," prosecutors allege, adding he also "engaged in a series of lies and deceptions to cover up his scheme, including by falsifying campaign donor forms, misleading municipal regulators, and providing false information in vetting forms" that Benjamin submitted while he was under consideration for the lieutenant governor role.
The real estate developer prosecutors say was involved with Benjamin in the campaign finance scheme, Gerald Migdol, was arrested last November. He is not named in the indictment charging the lieutenant governor.
Under the scheme laid out by prosecutors in court papers, Benjamin secured a $50,000 grant funded by the state for an education nonprofit controlled by the developer in exchange for campaign contributions that would qualify for the New York City Campaign Finance Board's matching funds program, which provides public dollars to match small donations.
During his unsuccessful run for city comptroller, Benjamin received at least $2 million in public funds through the public campaign financing program. After losing the primary for comptroller, he returned to his role as a state senator and then was selected as New York's lieutenant governor by Governor Kathy Hochul in August 2021.
Prosecutors say the alleged scheme began in March 2019, when Benjamin asked the developer to secure numerous small contributions for his comptroller campaign. After the developer, Migdol, expressed concerns about the ability to bundle political contributions, Benjamin told him, "Let me see what I can do," according to the indictment.
Several months later, in late May 2019, Benjamin informed the developer he had secured a $50,000 grant for the nonprofit, though the grant was not immediately disbursed, prosecutors allege.
Several weeks later, in July 2019, the indictment states Benjamin met with the real estate developer at his senate district office and received checks totaling $25,000 to his senate campaign, as Benjamin had not yet filed to run for comptroller. Prosecutors allege the contributions, made in the names of two of the developer's relatives, were an "attempt to conceal any connection between" him and the donations.
The indictment claims that during the meeting, Benjamin reminded Migdol of the state grant for his nonprofit, and he still expected the developer to procure small contributions for his comptroller campaign.
In September 2019, Benjamin attended a fundraising event for the developer's organization, during which he presented a $50,000 novelty check, which prosecutors said served as a "reminder of Benjamin's use of his official authority" for the nonprofit's benefit. Days after the event, Benjamin became eligible to begin receiving donations to his comptroller campaign after filing to run for the post.
According to the indictment, Benjamin called the developer in early October 2019 and specified he wanted contributions that would be eligible for the city's public campaign financing program. In a span of three months, beginning in October 2019, the developer provided numerous donations to Benjamin's comptroller campaign, many of which were fraudulent, prosecutors allege, as they were made in the names of people who hadn't authorized the contributions.
After THE CITY published an article questioning the legitimacy of some of the contributions to Benjamin's comptroller campaign, the nonprofit stopped efforts to secure disbursement of the state grant, which it had not yet received.
In addition to engaging in the alleged campaign finance scheme, Benjamin is also accused of attempting to use his influence to secure the real estate developer a zoning variance allowing construction on a property in Harlem in exchange for a $15,000 donation to an unnamed political campaign committee in 2020.
Prosecutors allege Benjamin and others acting on his behalf "engaged in a series of lies and deceptions" to conceal the bribery scheme and his connection to the developer.
Hochul tapped Benjamin to serve as her lieutenant after she became governor following Andrew Cuomo's resignation. He assumed the role in September.
source: https://www.cbsnews.com/news/brian-benjamin-indicted-new-york-lieutenant-governor-campaign-finance-fraud-scheme/