Father and son rescued after car plunges 500 feet down cliff 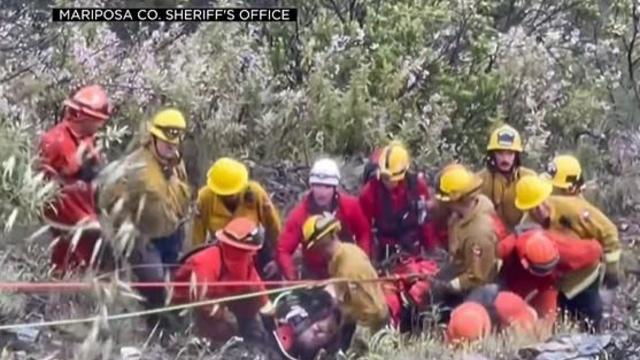 Rancho Cordova, Calif. — A Rancho Cordova father and son were rescued after their car crashed 500 feet off a cliff in Mariposa County Monday, CBS San Francisco reports.
It happened at the height of wild weather in the region.
The outcome could have been tragic if it hadn't for a "quick response" that Mariposa County Sheriff Jeremey Briese credited to the sharp eye of a Cal Fire firefighter who just happened to be passing by.
The roads were a mess, but the firefighter, who was heading back from a call, noticed a road marker was down and pulled over to figure out why.
The California Highway Patrol said Scott Anderson, 51, was traveling with his 11-year-old son when he lost control of his Toyota while making a turn in the rain. The car flipped several times before tumbling into a ditch, out of sight.
"The Cal Fire employee noticed signs of possibly a traffic accident or this delineator down," the sheriff said. "They're brave actions and their skills were able to find this vehicle."
The four-hour operation was complicated by rain and steep terrain but was pulled off by sheer
"The area that this car went off is an extremely steep canyon and it's an extremely rural area of the county," Briese said.
A small army of search and rescue teams needed lots of strength to pull the two up the cliff.
"I know the ropes they were using were 600-foot ropes, and once they reached the patients, they had about 100 feet left," Briese said.
Anderson and his son suffered moderate injuries, authorities said. At last check, they were still in nearby hospitals. Investigators said both were wearing seatbelts.
"Definitely, somebody was looking out for them," Briese said.
The CHP said alcohol and drugs weren't factors in the crash.
source: https://www.cbsnews.com/news/car-500-feet-down-california-father-and-son/