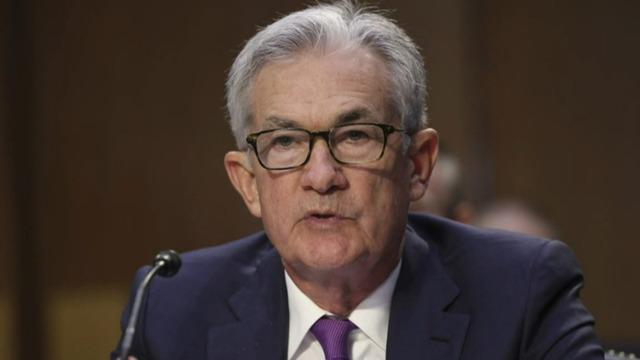 The Central Bank may increase the federal funds rate by .5% at the meeting in May as inflation soars, Federal Reserve Chairman Jerome Powell signaled Thursday. The Fed raised its rate by .25% in March, a move that some economists have criticized as not aggressive enough as inflation hit 8.5% last month – the fastest increase in 40 years.
"I would say that 50 basis points will be on the table for the May meeting," Powell said Thursday during an International Monetary Fund discussion on the global economy outlook as finance officials met this week in Washington.
Powell said that the decision is made meeting by meeting. The next meeting takes place May 3-4.
"It is appropriate in my view to be moving a little more quickly and I also think there's something in the idea of frontend loading whatever accommodation one thinks is appropriate," Powell said. "That points in the direction of 50 basis points being on the table certainly."
His comments are the latest in a series of remarks by Fed officials signaling more aggressive action could be in the works next month. In a recent interview, Federal Bank of New York President John Williams said the 50 basis points is a "reasonable option."
The rise in prices last month was largely fueled by rising energy and food costs, which have been affected by Russia's invasion of Ukraine. Powell said the U.S. economy is further removed than other countries from the affects of the war in Ukraine, but it's still putting upward pressure on inflation. Despite the great uncertainty and rising prices, Powell maintains on overall optimistic economic outlook.
"The U.S. economy is very strong, performing very well by most forecasts," Powell said. He noted the strong labor market, and said the U.S. will have another very strong year of growth.
"The big issue that we're very focused on is inflation, and getting inflation back down to our 2% goal," Powell said.
Bringing down inflation without pushing the U.S. into a recession is going to be a challenge. Treasury Secretary Janet Yellen recently said it's possible, but requires skill and good luck to achieve the so-called "soft landing." Powell on Thursday acknowledged the tough balancing act – getting supply and demand back in sync to bring down inflation without a slowdown that amounts to a recession.
"I don't think you'll hear anyone at the Fed say that that's going to be straightforward or easy," said Powell. "That's going to be very challenging. We're going to do our very best to accomplish that."
Powell noted that inflation is really a "global problem" and is "high in most places." But he did argue there are differences with the US having very strong growth and higher core inflation.
When asked if he thought inflation had peaked last month, Powell was hesitant to set an expectation. The Central Bank has faced criticism for saying throughout much of last year that inflation would be "transitory" before retiring the term. Powell noted they had had the expectation inflation would peak around this time and come down over the course of this year and next year. He said with expectations having been disappointing in the past, they now want to see "actual progress." He said they don't know if inflation peaked in march and would not "count on it." He also said the Fed no longer expects help from the supply side being fixed.
"We're really going to be raising rates and getting expeditiously to levels that are more neutral and then that are actually tight – tightening policy if that turns out to be appropriate once we get there," Powell said.
CBS News reporter covering economic policy.
source: https://www.cbsnews.com/news/fed-looks-to-hike-interest-rates-half-a-point-as-inflation-soars/