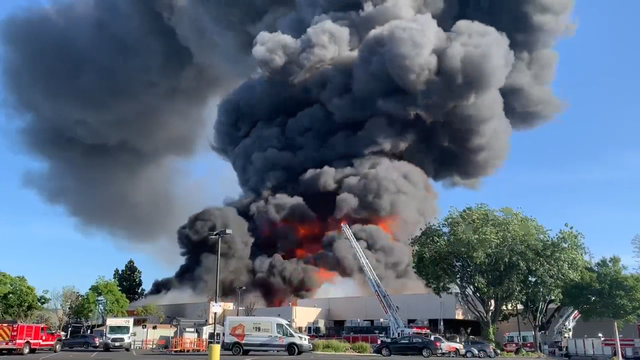 Firefighters are battling a 5-alarm fire at a Home Depot in San José, California, the San José Fire Department said. Crowds gathered to watch in the parking lot as the inferno spewed a massive column of smoke into the air.
Dozens of firefighters were on hand to battle the blaze, CBS San Francisco reports. The San José Fire Department warned people in the area who smelled to smoke to shelter in place.
"Close all doors and windows to minimize smoke from getting inside," the department tweeted. "Crews in defensive fire attack working to contain fire from spreading from unit of origin."
A nearby pet hospital also had to be evacuated, SJFD said.
No injuries have been reported from the fire, CBS San Francisco reports.
The fire was so intense that it showed up on the National Weather Service's radar.
📡Structure fire plume also showing up our KMUX weather radar #CAwx pic.twitter.com/8IevM8F3I8
source: https://www.cbsnews.com/news/home-depot-fire-san-jose-california/