Democrat Abby Finkenauer to remain on ballot for U.S. Senate in Iowa 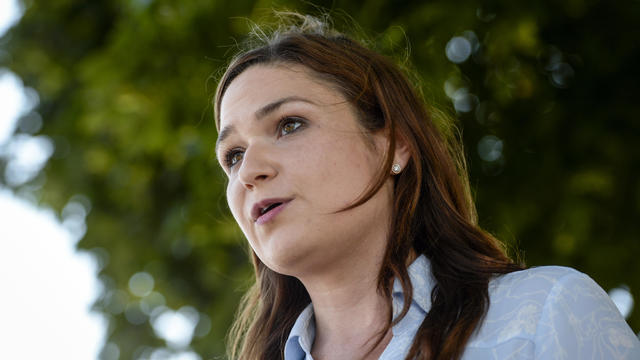 Iowa's Supreme Court ruled Friday that Abby Finkenauer, a Democratic candidate for U.S. Senate in Iowa, will be allowed to remain on the ballot, reversing a lower court's decision that said she did not have enough signatures to qualify.
Republicans who filed the original challenge took issue with three signatures submitted by Finkenauer's campaign, two with missing dates and one with an incorrect date. The state Supreme Court found that missing or incorrect dates are not specific reasons listed to overturn a petition signature, according to state law.
"In the end, we believe we must be guided by the legislature's last word on the subject," Iowa's Supreme Court wrote in their opinion.
Finkenauer is former congresswoman who lost her reelection bid in 2020. She is one of three Democratic candidates running against seven-term Republican Senator Chuck Grassley.
"The Iowa Supreme Court's unanimous decision today has affirmed that we are right on the law, and that we will be on the ballot for U.S. Senate. This is a moment for all advocates for democracy – Democrats, Republicans, and Independents – to celebrate the enduring strength of our democratic process and a reminder to never take it for granted," Finkenauer wrote in a statement.
The Iowa secretary of state's office had initially accepted Finkenauer's signatures when they were submitted.
After a challenge was filed in March, a three-person panel, consisting of Iowa's secretary of state, state auditor and state attorney general voted 2 to 1 to overrule objections over the signatures and allow Finkenauer to remain on the ballot. But a state district court ruled on April 10 that the objections had standing and that the signatures shouldn't have been counted.
Iowa's primary is scheduled for June 7, and overseas absentee ballots must be mailed to voters by April 23.
Aaron Navarro is an associate producer for the political unit at CBS News, focusing on House and gubernatorial campaigns as well as the census and redistricting.
source: https://www.cbsnews.com/news/abby-finkenauer-senate-iowa-remains-on-ballot/