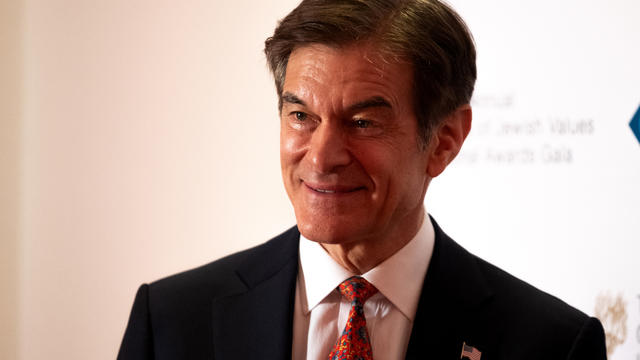 Before he gave up his entertainment career to run for U.S. Senate, Mehmet Oz — the celebrity heart surgeon best known as the host of daytime TV's "The Dr. Oz Show" — amassed assets worth more than $100 million, including homes, stock, life insurance and connections to his in-laws' tree-trimming empire.
Oz on Wednesday night filed a financial disclosure form — required of all Senate candidates — that tallies a long list of investments that back up the finances of a man who has said he put $10 million into his campaign in Pennsylvania.
Oz valued his assets at between $104 million and $422 million, according to a tally by The Philadelphia Inquirer, a wide range that is a result of the Senate's request that each asset be valued within a certain dollar bracket. If elected, he would be one of the wealthiest members of the Senate — and possibly the wealthiest.
He reported earning about $10 million in 2021, nearly all of it from his TV show host salary and ownership of the show's parent company.
Oz isn't the only multimillionaire in the seven-person Republican primary field in Pennsylvania. The race for the open Senate seat was shaken up when Trump-endorsed Sean Parnell dropped after losing a custody battle amid abuse allegations by his estranged wife.
Former hedge fund CEO David McCormick has yet to file a financial disclosure. Another wealthy candidate, Carla Sands, filed a public disclosure of assets last year, valuing more than 50 accounts or properties at between $35 million and $152 million.
For Oz, his filing shows at least $11.5 million — and possibly much more — in non-public stock in Asplundh, the tree-trimming company owned by his wife's family. They list at least $6 million in non-public stock in the convenience store chain Wawa Inc.
His tens of millions of dollars in equities includes millions in stock in Amazon, Microsoft and Google's parent company, Alphabet. He also lists life insurance policies worth millions.
Oz, a longtime New Jersey resident, lists two homes in that state valued at at least $1 million — including the one where Oz lived for a couple of decades before deciding to run for the Senate — plus another home in suburban Philadelphia valued at $1 million or more.
There's also a vacation home in Palm Beach, Florida, that Oz values at $5 million to $25 million and a cattle farm in Okeechobee, Florida, valued at $1 million or more. He puts the value of the cattle at $250,000 to $500,000.
Pennsylvania is expected to be one of the most expensive Senate races during the 2022 midterms. The primary is scheduled for May 17.
source: https://www.cbsnews.com/news/dr-oz-100-million-in-assets-pennsylvania-senate-race/