The $29 billion plan to save Texas' coast from rising tides 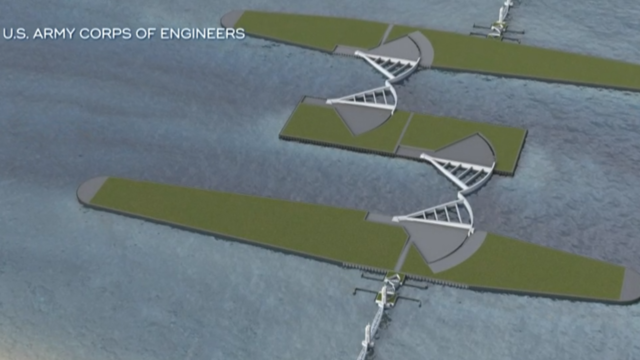 Galveston, Texas — Oceanographer Bill Merrell will never forget the night he spent trapped inside a building in Galveston, Texas, as Hurricane Ike slammed ashore in 2008. The storm caused $30 billion in damage.
"Ike was probably a 30-year storm," Merrell, who works at Texas A&M University, told CBS News. "There's a lot worse storms out there."
Merrell was reminded of the giant flood gates he had seen in the Netherlands.
"These are gates you can see from space. These are movable objects you can see from space. These are huge!" he said.
He sketched out a Texas version, which came to be known as the "Ike Dike." The initial response to the idea?
"Oh, ridicule. Craziest idea they ever heard," Merrell said.
That crazy idea may soon stand guard at Galveston Bay, home to the nation's largest export harbor and the biggest petrochemical complex in the Western Hemisphere. It is part of the Army Corps of Engineers' $29 billion plan to defend a large part of the Texas Gulf Coast. It calls for massive gates designed to fend off 22 feet of storm surge and 43 miles of sand dunes to protect against hurricanes.
Kelly Burks-Copes, who works for the Army Corps, said the plan would be the largest infrastructure project in the nation and take up to 20 years to design and build.
"If we want to live here on the coast then we have to provide a level of defense," Burks-Copes told CBS News. "The intent here is to keep the surge that comes with hurricanes out in the gulf and not let it into the bay."
If Congress funds the project, the federal government will pick up 65% of the cost, and Texas would pay the rest.
State Sen. Larry Taylor said there's no time to waste with climate change making storms more intense.
"Building this one time is going to pay for itself over and over again," Taylor told CBS News. "It's not a matter of if we have a storm, it's when and how many, and here we have a chance for our government to be proactive instead of reactive."
Ben Tracy is a CBS News senior national and environmental correspondent based in Washington, D.C.
source: https://www.cbsnews.com/news/texas-gulf-coast-climate-change-flood-gates-sand-dunes/