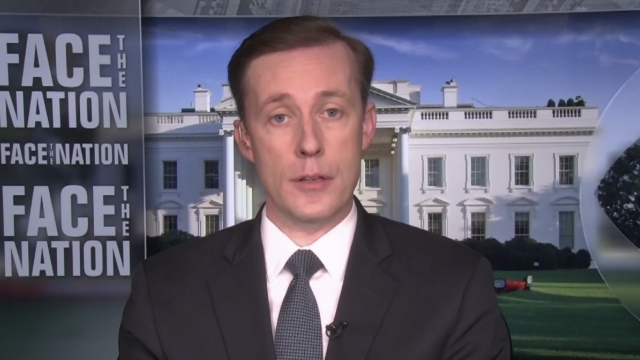 As Russian forces shift their attention to the contested Donbas region in eastern Ukraine, the U.S. is focused on helping Ukrainians defend against that advance, just as they did in the capital of Kyiv, White House national security adviser Jake Sullivan told "Face the Nation" moderator Margaret Brennan on Sunday.
"Our job, Margaret, as I said before, is to help ensure that the Ukrainians are in a position to resist that advance and ultimately to be in the strongest possible position, both on the battlefield and at the negotiating table," he said, adding that the U.S. and its allies would continue to deliver weapons and other military assistance to Ukraine.
Despite the growing death toll and widespread devastation in Ukraine, Sullivan expressed confidence that the country could win more battles with the help of Western nations.
"First, let's pause there for a moment, because it is a remarkable thing that the Ukrainians won the battle of Kyiv," he said. "Russia lost the battle of Kyiv. Kyiv still stands. The capital city of Ukraine was subject to an attack as its invading neighbor tried to conquer Kiev, and Russia failed.
"And they failed chiefly because of the bravery and skill of the Ukrainian armed forces. But they also failed because the United States and our partners put in the hands of those armed forces advanced weapons that help beat back the Russians," Sullivan said.
Asked about Russian President Vladimir Putin's reported appointment of a general who oversaw a series of brutal attacks in Syria as the new central war commander for Ukraine, Sullivan said the move is an "indication" that Ukraine could see more atrocities in the days to come.
"It's actually just consistent with the way Russia has conducted this war from the beginning," Sullivan said. "We've seen scorched-earth warfare already, we've seen atrocities and war crimes, and mass killings and horrifying and shocking images from towns like Bucha and the rocket attack at Kramatorsk."
His assessment comes days after a missile strike on a packed train station in the eastern Ukrainian town of Kramatorsk killed dozens of civilians, including several children, as well as the recent discovery of dozens of bodies in the Kyiv suburb of Bucha and elsewhere following the withdrawal of Russian troops.
Sullivan said it's the responsibility of the U.S. and the international community to "flow weapons and military assistance to Ukraine" so its forces have the tools to fight back effectively.
Russia has denied being responsible for the Kramatorsk strike and has falsely claimed the grisly scenes on the streets of Bucha were staged.
Ukrainian President Volodymyr Zelenskyy has urged a tough global response to Russia's brutal invasion of his country, saying Friday night that the train station attack amounted to another war crime for an international tribune to consider. He has also accused Russia of committing genocide in Ukraine with the goal of "elimination of the whole nation and the people, setting up camps and abducting numerous children.
Zelenskyy told CBS' "60 Minutes" in an interview set to air Sunday that the Ukrainian security service has intercepted communications from Russian soldiers discussing what he described as war crimes.
"There are [Russian] soldiers talking with their parents about what they stole and who they abducted," he said. "There are recordings of [Russian] prisoners of war who admitted to killing people. There are pilots in prison who had maps with civilian targets to bomb."
Amid calls for the U.S. to do more, Sullivan defended the Biden administration's approach and cited the "unprecedented scope, scale and speed" of the assistance provided to Ukraine so far. He said he also expects the existing sanctions against Russia to play a role.
"They will have an effect," he said. "They will lead to a circumstance in which Russia has less capacity, less resources to be able to prosecute this war. So the United States is stepping up and is discharging its obligations on behalf of the Ukrainian people, on behalf of the principles of freedom and liberty and democracy and human rights. And we will continue to do so."
source: https://www.cbsnews.com/news/russia-ukraine-war-east-donbas-jake-sullivan-face-the-nation/