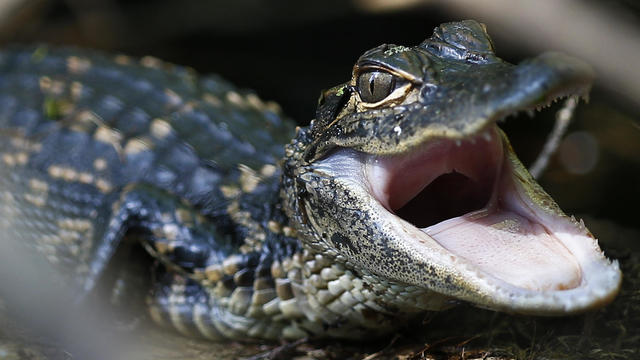 A 31-year-old Florida man was arrested after officers found a lot more than what they bargained for while conducting a traffic stop — two guns, multiple syringes loaded with meth … and a baby alligator.
In a Facebook post, the Collier County Sheriff's office in Naples said deputies pulled over a black GMC Sierra pickup Friday after they recognized the driver from previous encounters as having a suspended license.
Officers found the live baby alligator in an plastic tub in the bed of the truck. They also located two firearms inside the pickup -- one was allegedly concealed in the glove box and the other was allegedly hidden under the front passenger seat.
The front-seat passenger, Michael Marolla, was arrested and charged him with two counts of carrying a concealed firearm.
He also faces charges of possession of a controlled substance after the sheriff's office said deputies found multiple loaded syringes in Marolla's jacket. The syringes tested positive for methamphetamine, officials said.
Deputies notified the Florida Fish and Wildlife Conservation Commission about the alligator. The sheriff's office said wildlife officers responded to investigate but did not release any more details about the alligator.
Did you hear the one about the guns, drugs and gator CCSO deputies found in a truck in Golden Gate Estates today? It...
In 2020, Florida authorities tracking a stolen car also discovered a baby alligator, along with guns, heroin and cocaine.
It is illegal to own an alligator in Florida unless authorized by the state's Fish and Wildlife Conservation Commission.
source: https://www.cbsnews.com/news/florida-traffic-stop-baby-alligator-guns-meth-arrest/