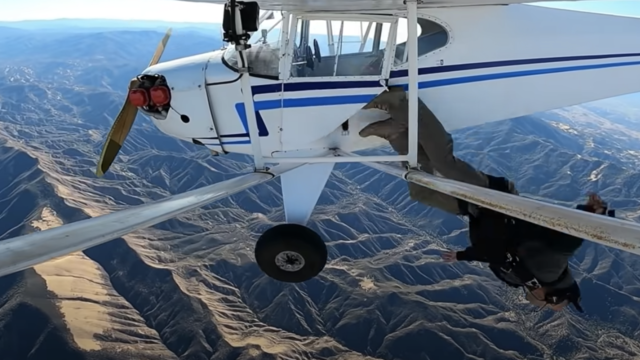 A YouTuber who crashed his plane in 2021 did so deliberately so he could use the footage in a video, the Federal Aviation Administration says. The video on Jacob's YouTube channel, which has 134,000 subscribers, has massed nearly 2 million views since it was posted in December.
Trevor Jacob, a snowboarder who has competed in the Olympics, had been under investigation from the FAA following his plane crashed in the Los Padres National Forest on November 24, 2021.
In a letter to Jacob obtained by CBS News, the FAA says its investigation found prior to the flight, Jacob attached multiple cameras outside the plane, pointed in the direction of the propeller, "in order to record video footage of the outside and inside of the plane during flight."
Jacob said the engine failed, but prior to jumping out of the plane, he put on a parachute and made no attempts to restart the engine or look for areas to land, nor did he try to contact Traffic Control on the emergency frequency, the FAA says.
"You jumped out of [the plane] while holding a camera attached to a selfie stick and continued to record the aircraft during your descent," the letter reads. "After the crash you recovered and then disposed of the wreckage of [the plane]." He did, however, take the cameras.
The FAA says Jacob was "careless or reckless so as to endanger the life or property of another," and they are revoking his private pilot license.
The crash video is by far one of Jacob's most viewed videos, and he has only uploaded one video on YouTube since. His YouTube channel frequently features skydiving and other extreme sports like snowboarding.
CBS News has reached out to Jacob for comment and is awaiting response. The FAA did not provide additional comment to CBS News.
Caitlin O'Kane is a digital content producer covering trending stories for CBS News and its good news brand, The Uplift.
source: https://www.cbsnews.com/news/trevor-jacob-plane-crash-youtube-video-faa-investigation-pilot-license-revoked-deliberate/