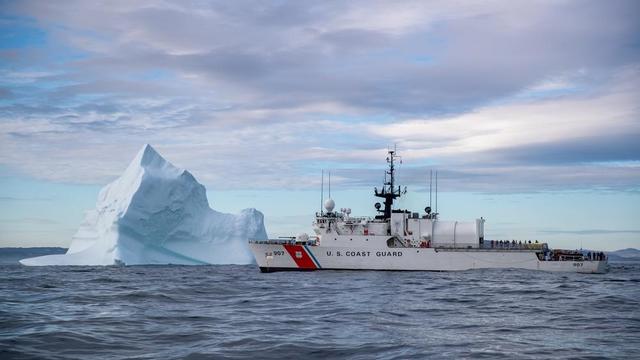 It was the "unsinkable ship" until it wasn't.
Ten minutes before the maiden voyage of the Titanic ended in calamity, a radio operator aboard the nearby SS Californian signaled that there was an iceberg in the ship's path. The warning was ignored, and the massive collision that followed cost over 1,500 lives, prompting a wave of maritime innovations: sonar and radar navigation features, lifeboat drills and the creation of the International Ice Patrol (IIP.)
Now, 110 years after the sinking of the Titanic, the U.S. government is developing a new technology that's designed to detect and report icebergs to the maritime community.
"Operation Titanic," spearheaded by the Department of Homeland Security's Science and Technology Directorate, will fuse satellite-based radar imagery with ship reporting systems to enable the U.S. Coast Guard to identify glacial masses throughout the North Atlantic Ocean in real time.
Floating icebergs like the one the Titanic struck on April 15, 1912, still pose navigational hazards today for ships, oil rigs and military assets, says Kathryn Coulter Mitchell, the DHS senior official performing the duties of the under secretary for science and technology, told CBS News.
"The Titanic actually struck the iceberg at a latitude equivalent to the Massachusetts area," Coulter Mitchell said. "Those of us in this mission space don't always realize just how far south, how prevalent the iceberg mission is."
The 16-person IIP is funded by 17 nations bordering the trans-Atlantic, but is operated by the U.S. Coast Guard during ice season, from February through July
The patrol initially relied on cutters deployed by the U.S. Coast Guard to survey icebergs but switched to aircraft monitoring after World War II. Today, the IIP pilots 9-day aircraft missions every two weeks.
"Operation Titanic" will mark a "complete departure from [U.S. Coast Guard's] many decades of flying fixed-wing aircrafts to locate icebergs," said Coast Guard Commander Marcus Hirschberg with the International Ice Patrol. .
"Aerial ice reconnaissance" routinely adds up to more than $10 million in annual costs for the U.S. Coast Guard. Beyond the price tag, C-130J aircrafts that fly bi-weekly missions – roughly 500 aircraft hours per season – are also the U.S. Coast Guard's most highly sought after aviation assets.
"We're going to get a lot more bang for our buck once we can use those aircraft hours for disaster response, counterdrug operations, migrant operations and other areas," Hirschberg added.
CBS News reporter covering homeland security and justice.
source: https://www.cbsnews.com/news/iceberg-detection-operation-titanic/