Toyota New Zealand is partnering with several local companies to roll out the country's first commercial trial of hydrogen-powered vehicles. 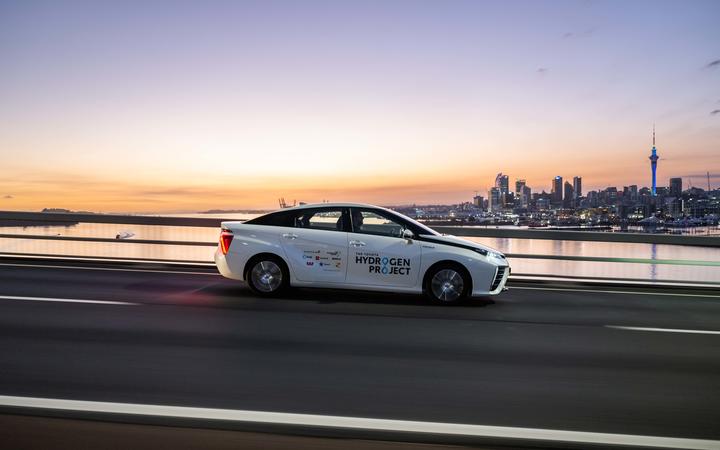 The Toyota Mirai would be used in the country's first commercial trial of hydrogen-powered vehicles. Photo: Supplied / Toyota

The scheme will see the likes of The Warehouse, Spark, Air New Zealand, and five other companies, contribute funding and take part in the car sharing scheme to test two Toyota Mirai, with the potential to add more over three months.

The trial will commence on 1 May in Auckland, with the goal of seeing whether a zero-emission precinct could be created in the central city.

The vehicles will be refuelled at the Ports of Auckland with green hydrogen, supplied by Hiringa Energy and Japan's Obayashi Corporation.

Toyota New Zealand general manger Andrew Davis told RNZ the trial was about showing the public that hydrogen was an energy source that can be used in New Zealand.

"If we can showcase that we can produce green hydrogen, we can use it, we can provide vehicles and share them across large organisations, the potential to reduce our impact on the New Zealand environment and ultimately on the planet is really high."

The trial will also examine the potential for car-sharing between companies to curb emissions.

Toyota was bullish on the potential of hydrogen as a fuel source, saying it can store more energy in less weight, meaning it was suitable for vehicles with heavy payloads and a long range.

Davis said the fuel cell technology in the Mirai had numerous other applications that it was looking to explore.

"Aside from this trial we will certainly be starting to talk to partners to see what our role is and how we can assist in getting hydrogen power in the New Zealand market."

The company acknowledged that the country's hydrogen infrastructure was still in its infancy and the trial was launched to incentivise greater investment to take advantage of the burgeoning hydrogen export market.

The company had signed a deal with the US-based hydrogen vehicle company Hyzon Motors to bring 20 trucks into the country which would be owned and leased by the TR Group.

Hiringa expected the trucks and the fuelling stations to be operational by the end of 2022. It would supply the hydrogen for the network which would be produced at the refuelling sites.

However, the price of the trucks and the cost of refuelling them would come at a premium, that may be passed on to end-consumers.

Hiringa chief executive Andrew Clennett told RNZ in November that hydrogen-powered truck may not be competitive with their diesel counterparts in terms of price until 2025-2026.

Andrew Davis said key stakeholders would have to work collaboratively right across a range of industries to develop green hydrogen production at scale to help bring down prices.

Channel Infrastructure, formerly known as Refining NZ, was alreadyexploring the possibility of developing a green hydrogen plant at its site after decommissioning large parts of its plant.

Meridian Energy and Contact Energy were also looking for investment partners to develop a green hydrogen production plant in Southland.