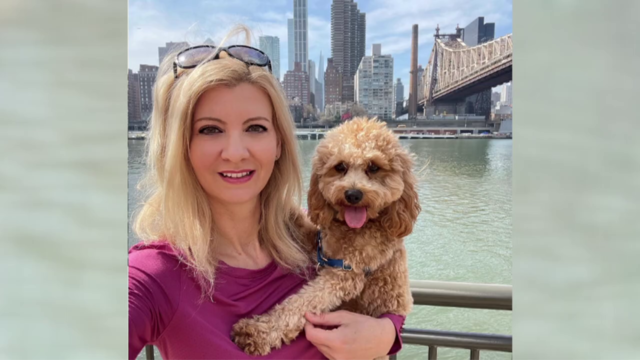 New York — Police are continuing to piece together the killing of Orsolya Gaal.
The 51-year-old's body was found inside a duffel bag Saturday morning not far from her home in the New York City borough of Queens.
As CBS New York reported Monday that home, on a quiet street, has since turned into a crime scene.
The NYPD arrived Monday afternoon, searched a garage and left with evidence. Investigators then returned in the evening and left with a single bag, CBS New York says.
Neighbors are still in shock.
"Everybody is on edge because apparently a killer is running around," Nick Bais said.
"I got goosebumps," another neighbor told CBS New York.
"It feels like something out of TV. It's just really, it's rough," resident Patrick Tuszakowski said.
"It's scary. I don't understand how somebody can do this," added resident Steven Agardi.
Sources close to the case told CBS New York Gaal went to see a show at Lincoln Center with friends on Friday night and later sat alone in a bar near her home, seemingly waiting for someone for 40 minutes before going home alone.
On Saturday morning, her body was found stuffed in a duffel bag about nine blocks away. She had more than 50 stab wounds, as well as blunt force trauma to her head.
"We saw all the police ... and it's really sad. My heart goes out to the family," said nearby resident Christina Aptowitz.
Investigators believe Gaal was killed by someone she knew. It appears the killer entered her home through the back door. There was no indication of forced entry. Sources said Gaal's wounds indicated she fought her attacker until her death.
Police said there was a trail of blood from where the duffel bag was found to Gaal's home. CBS New York was told her husband and older son were out of state when she was killed. Sources said Gaal's husband told police he received threatening text messages over the weekend, but high-ranking officials have not seen those texts for themselves, CBS New York reported.
Gaal's 13-year-old son was home at the time, but police have ruled him out as a suspect.
"Say your prayers for the family now because she's gone already," neighbor Theodora Grafas said.
Grafas wasn't just the family of four's neighbor, she was Gaal's friend. She said they'd see each other in their backyards and would get their nails done together.
"Her kindness to people, super friendly. And the way she took care of her kids and her husband. She was just a great person," Grafas said.
The last time she saw Gaal was Friday morning. Never did she think it would be their final exchange.
"I passed by, she waved to me, I waved to her. I was going to do some errands," Grafas said.
"May God rest her soul," Grafas added.
Gaal's death left some with more questions than answers.
"You keep reliving the sequence of events. How did this happen? It's actually quite strange," neighbor John Blankson said. "The more it goes on, the more the gravity of the situation just keeps making it worse."
Elijah Westbrook is an Emmy-Award Winning journalist. He joined CBS2 News and CBS News New York in January 2022.
source: https://www.cbsnews.com/news/orsolya-gaal-nyc-mom-body-duffel-bag-stabbed-more-than-50-times-sources/