The Samoa government has extended the Covid-19 State of Emergency Alert Level 2 lockdown until midnight Tuesday 3 May.

It was due to end Tuesday night.

It has also decided to relax many of the current bans by extending trading hours from 6am to 8pm Monday to Saturday. 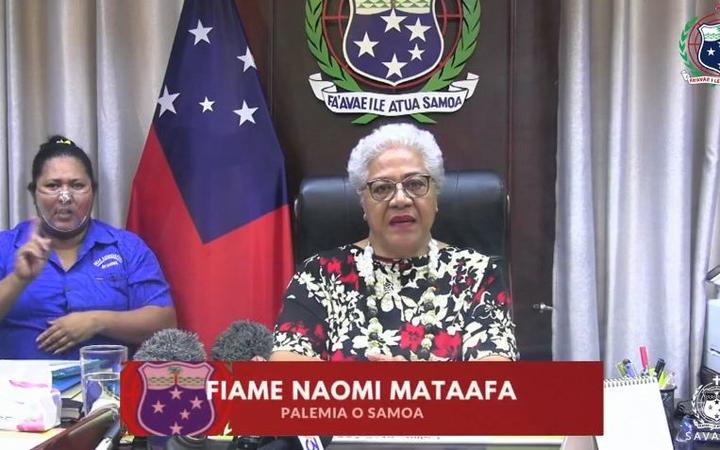 Prime Minister Fiame Naomi Mata'afa said the cabinet has also decided to lift the ban on alcohol sales but only in hotels, bars, restaurants and licensed premises.

With the extended opening hours, Cabinet has also approved Sunday trading, but from noon until 8pm.

A curfew has also been mandated from 10pm until 6am daily and bigger crowds at public gatherings have been raised to 50 for indoors gatherings and 100 for outdoors activities.

Fiame said her government continues to impress on the country the need to heed all health measures now in place for protection against COVID-19.

"We need to be vigilant in implementation of ministry of health requirements and advisories," she said.

Other changes announced yesterday see all gaming, including bingo, allowed from 6am until 8pm nightly except Sundays.

Swimming at beaches and rivers is also open without restrictions as well as other sporting and recreational activities.

The government however has put the onus on event organisers to ensure adherence to all health protection requirements, including the wearing of face masks, requiring vaccination cards and social distancing.

Schools remain closed, while children under 12 years old are still not allowed at any public events and gatherings.

Fiame said the current nationwide vaccination rollout continues to increase adding that 59,759 booster shots had been administered so far which equates to 49.8 percent of the 18 years and older age group.

"I am warmed by the fact that as a nation we continue to be united in prayer for the safety and security of all our people. Our condolences go out to families of all those whose lives have been lost in their battles with Covid," she said.