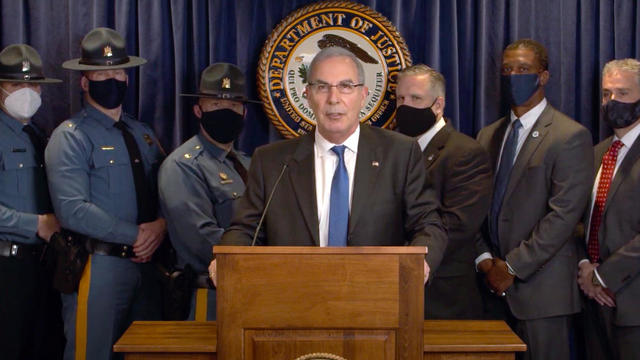 U.S. Attorney David Weiss has managed to stay out of the spotlight for much of his 20-year career as a federal prosecutor, but that might soon change.
Weiss now finds himself overseeing the politically-charged investigation into Hunter Biden's possible tax violations and other aspects of his business dealings.
The 66-year-old Weiss, a Republican, will have to decide whether there is sufficient evidence to seek a federal grand jury indictment against the son of a sitting president, Democrat Joseph Biden.
"David is a straight shooter," said a former close associate of Weiss who spoke to CBS News on condition of anonymity.
The former associate described Weiss as a moderate Republican who is apolitical in his work. "He is not a Trumper nor is he close to Biden."
Then-President Donald Trump appointed Weiss to be U.S. Attorney in Delaware in 2018. He had been acting head of the office at the time and received the endorsements of Delaware's U.S. Senators Tom Carper and Chris Coons, both Democrats.
Biden elected to keep Weiss in the position — one of the only Trump-appointed U.S. Attorneys to remain — because he understood the political risk of removing the prosecutor in the midst of an ongoing investigation into Hunter Biden. Hunter Biden's attorney has not responded to requests for comment.
In overseeing the four-year investigation, several former colleagues of Weiss told CBS News that Weiss would be neither overly aggressive nor overly protective in handling the investigation.
"David is a diligent professional prosecutor," said Robert Kravetz, a former assistant U.S. Attorney for Delaware for 13 years.
The gray-haired Weiss, a native of Philadelphia, was an assistant U.S. Attorney in the office from 1986 to 1989. While there, he prosecuted corruption, money laundering, and mail and wire fraud.
He left and became a partner at the Duane Morris law firm but returned for a couple of stints at the U.S. Attorney's office before becoming acting U.S. Attorney in 2017.
"He's a leader who cares about the people who work for him," Kravetz said. He noted that Weiss left for private practice and other jobs through the years but was repeatedly invited to rejoin the office under U.S. Attorneys from both political parties.
"He provides quiet, steady leadership," Kravetz said. "He surely doesn't seek the limelight."
Pat Milton is a CBS News investigative producer
source: https://www.cbsnews.com/news/hunter-biden-investigation-prosecutor-david-weiss/