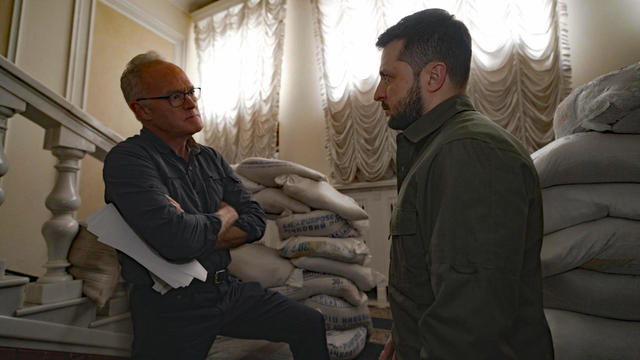 60 Minutes correspondent Scott Pelley interviewed Ukrainian President Volodymyr Zelenskyy inside a government building in Kyiv for a two-part report that airs Sunday on 60 Minutes after coverage of the Masters.
"What must the world understand?" Pelley asked Zelenskyy.
"We are defending the ability of a person to live in the modern world. They say we're defending Western values. I always say, what are Western values? Someone who lives in the United States or Europe, do they also not like children? Do they not want their children to go to university, do they not want their grandfather to live for 100 years? We have the same values. We are defending the right to live. I never thought this right was so costly. These are human values.  So that Russia doesn't choose what we should do and how I'm using my rights. That right was given to me by God and my parents," Zelenskyy said.
Pelley also went to Bucha, where residents were killed and evidence of war crimes are emerging. Zelenskyy visited Bucha this week; when asked by Pelley what he saw there, Zelenskyy responded, "Death. Just death."
Pelley has reported on the war in Ukraine since it broke out. He spoke with refugees and those trying to help them from a train station near Poland's border with Ukraine, and embedded with medical volunteers in Lviv as they delivered much needed supplies into the country as hospitals, health care facilities and ambulances have been under attack.
source: https://www.cbsnews.com/news/volodymyr-zelenskyy-60-minutes-interview-preview-2022-04-08/