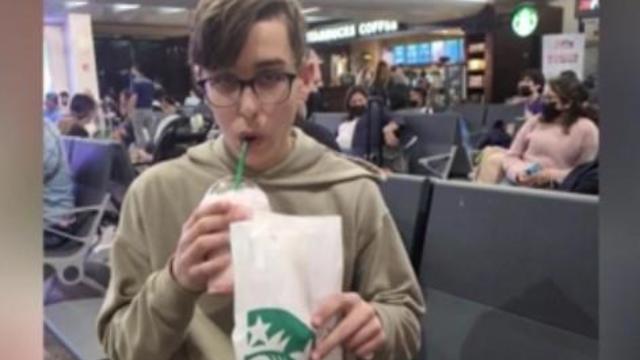 The Department of Homeland Security says thousands of refugees displaced by Russia's invasion of Ukraine have traveled to Mexico hoping to gain refuge in the United States. That now includes a teenager trying to get placement with his aunt and uncle, who live in the Los Angeles area.
CBS Los Angeles says Ivan Yerashov is a typical 14-year-old, who's into sports and his computer. As of a week and a half ago, he also became a Ukrainian refugee.
His aunt, Iryna Merezhko, picked him up in Kharkiv after her sister said she and her husband wanted to stay and fight against the Russian invasion, but they wanted their son brought to safety, a move the family did its best to spin, according to Merezhko.
"I told him it will be like a long summer break in California for you, yeah. Don't think about the divided with parents, like a long summer break," she said.
After 30 hours on an evacuation train and 40 hours on a plane, the teen and his aunt made their way to a refugee camp in Mexico, where she'd heard the best and easiest way to get her nephew into the U.S. was to go to the border and ask for humanitarian admission.
Once in San Diego, though, immigration workers said Yerashov had to stay in a detention center for two or three days until the Merezhko's had a background check and their connection to the teen was verified.
After just three days, they were told the wait for the teen could be as long as 20 to 30 days, alone and without a phone for someone who has just left his country and his family in a war zone with no idea if or when he might return.
"I think it's very difficult, psychologic for him, and without a connection to his parents and with us," Merezhko said.
His aunt and uncle said they understand safety protocols, but also said they believed 20 to 30 days was cruel given all their nephew's been through. The couple hired an attorney to try to get the 14-year-old out immediately.
Yerashov took one last picture with his mother and his aunt before leaving Ukraine, a moment Merezhko said she knew could be the last.
"Me and my sister understand it could be last goodbye, yeah."
Both Merezhkos said while they want to help their nephew get out, they also want to help all children of wars from having to stay in those detention centers for anything longer than just a few days.
source: https://www.cbsnews.com/news/russia-ukraine-war-family-teen-ukrainian-nephew-san-diego-immigrant-detention-center/