Biden says Putin committing "genocide half a world away" 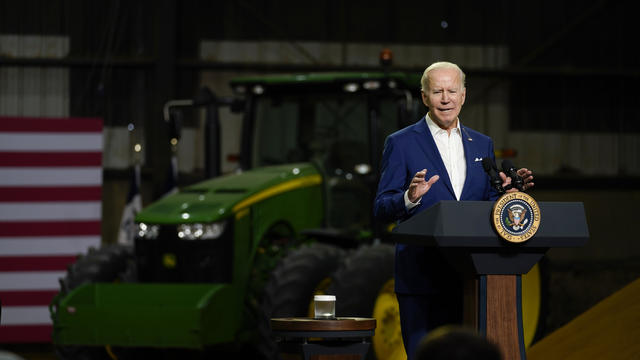 President Biden on Monday declared Russian President Vladimir Putin's actions "genocide," the first time he's publicly invoked the phrase since Putin began his deadly assault on Ukraine.
Mr. Biden used the phrase during a speech in Iowa about his administration's efforts to combat high prices for goods. The Labor Department announced consumer prices rose 8.5% in March over a year ago, the highest jump in four decades. The Biden White House has taken to declaring price jumps at the gas pump and elsewhere the "Putin price hike," although the price of gas and other key household expenses were on the rise before Russian forces invaded Ukraine.
"I'm doing everything within my power by executive orders to bring down the price and to address the Putin price hike," Mr. Biden said. "In fact, we've already made progress since March inflation data was collected. Your family budget your ability to fill up your tank, none of it should hinge on whether a dictator declares war and commit genocide half a world away."
The president's phrasing goes further than other U.S. officials have gone on record, as Mr. Biden did when he called Putin a war criminal well before the State Department formally said Russia's actions constituted war crimes. Ukrainian President Volodymyr Zelenskyy has accused Putin and Russia of committing genocide.
"Indeed, this is genocide — the elimination of the whole nation and the people," Zelenskyy told "Face the Nation" on April 3.
National security adviser Jake Sullivan said last week that the U.S. has "seen war crimes" but they "have not seen a level of systematic deprivation of life of the Ukrainian people to rise to the level of genocide."
The United Nations broadly defines genocide as seriously harming or killing members of a group with the intent to destroy, in whole or in part, a national, ethnical, racial or religious group. It's unclear whether the genocide line Tuesday was scripted or whether the president added it himself.
White House press secretary Jen Psaki on Tuesday said she didn't have anything to confirm on unconfirmed reports that Russia has used chemical weapons in Mariupol.
Kathryn Watson is a politics reporter for CBS News Digital based in Washington, D.C.
source: https://www.cbsnews.com/news/biden-putin-actions-genocide/