Report: Anti-Semitic incidents jumped 34% in 2021 over prior year 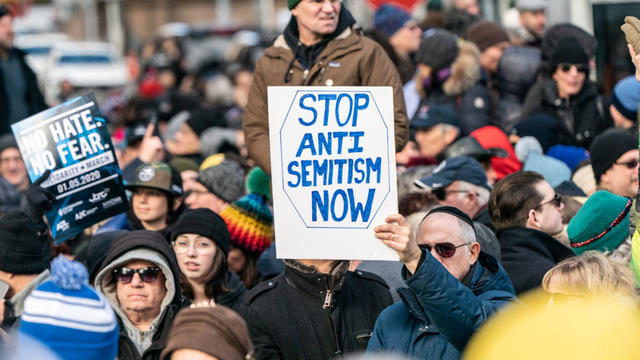 The number of antisemtic incidents in the United States in 2021 increased by 34% over the previous year, according to a new report released by the Anti-Defamation League Center on Extremism. The 2,717 incidents in 2021 is the highest number recorded by the ADL since it began tracking them in 1979, the group said.
"When it comes to antisemitic activity in America, you cannot point to any single ideology or belief system, and in many cases, we simply don't know the motivation," ADL CEO and national director Jonathan Greenblatt said in a release Tuesday. "But we do know that Jews are experiencing more antisemitic incidents than we have in this country in at least 40 years, and that's a deeply troubling indicator of larger societal fissures."
According to the yearly report, 88 cases of assault were cataloged in 2021, along with 1,776 cases of harassment and 853 cases of vandalism. None of the assaults were deadly or resulted in mass casualties, and 77 of the reported assaults were committed without the use of a deadly weapon.
Extremist groups or individuals who are known members of extremist groups accounted for 484 of the incidents, the ADL said. The vast majority of these came in the form of "antisemitic fliers, banners, stickers or written messages." The ADL also noted that "all of the incidents emerged from adherents of right-wing or white supremacist ideologies."
While incidents were reported in all 50 states and the District of Columbia, New York, New Jersey, California, Florida, Michigan and Texas had the highest tally, accounting for 58% of all recorded incidents.
New York also had the largest number of physical assaults. Under the ADL's definition, which is an "attempt to inflict physical harm on one or more people who are  Jewish or perceived to be Jewish, accompanied by evidence of antisemitic animus," 12 Jewish individuals were assault in Manhattan and 34 in Brooklyn.
source: https://www.cbsnews.com/news/antisemitic-incidents-increased-34-percent-in-2021-anti-defamation-league-report/