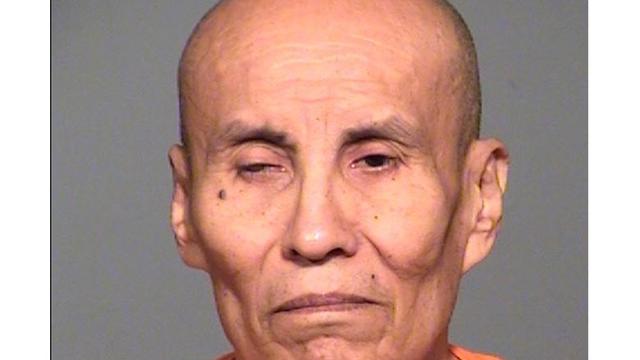 A prisoner scheduled to be executed in three weeks in what would be Arizona's first use of the death penalty in nearly eight years will die by lethal injection and not in the gas chamber - a method that hasn't been used in the United States in more than two decades.
Clarence Dixon declined to pick a method of execution when officials asked him if he wanted to die by lethal injection or the gas chamber, leaving him to be put to death by lethal injection - the default method for condemned prisoners who don't make a decision, Dixon's defense team said Wednesday.
Dixon is scheduled to be executed on May 11 with an injection of pentobarbital for his conviction in the 1977 murder of Arizona State University student Deana Bowdoin. Prosecutors believe the execution will likely be delayed if a judge goes forward with a hearing to determine whether Dixon is mentally fit to be put to death.
The last lethal gas execution in the United States was carried out in 1999 in Arizona. The horrific nature of gas-chamber deaths and the advent of lethal-injection executions turned the United States against lethal gas.
Arizona refurbished its gas chamber at the prison in Florence, southeast of Phoenix, in late 2020.
Arizona, California, Missouri and Wyoming are the only states with decades-old lethal-gas execution laws still on the books. Arizona is the only one that still has a working gas chamber.
In recent years, Oklahoma, Mississippi and Alabama have passed laws allowing executions with nitrogen gas, at least in some circumstances, though experts say it's never been done and no state has established a protocol that would allow it, according to the Death Penalty Information Center.
Corrections officials in Arizona have declined to say why they were restarting the gas chamber.
The move came as states find it increasingly difficult to secure lethal injection drugs as manufacturers refuse to supply them. Arizona had struggled to find drug suppliers but revealed last year that it had obtained a shipment of pentobarbital.
The last prisoner to be executed in a U.S. gas chamber was Walter LaGrand, the second of two German brothers sentenced to death for killing a bank manager in 1982 in southern Arizona. It took LaGrand 18 minutes to die in 1999.
Both brothers chose the gas chamber in hopes that courts would find the method unconstitutional. While Karl LaGrand accepted the state's last-minute offer of lethal injection, Walter LaGrand rejected it, saying he would prefer a more painful execution to protest the death penalty.
The case drew widespread criticism in Germany, which has no death penalty, and prompted repeated diplomatic protests.
Arizona's gas chamber refurbishment was condemned internationally, including in coverage in Israel and Germany drawing parallels to Holocaust atrocities.
Earlier this month, a judge denied a request by the Jewish Community Relations Council of Greater Phoenix to bar the state from using cyanide gas to carry out executions in Arizona.
Authorities have said the 21-year-old Bowdoin, who was found dead in her apartment, had been raped, stabbed and strangled. Dixon had been charged with raping Bowdoin, but the charge was later dropped on statute-of-limitation grounds. He was convicted, though, in her death.
The last time Arizona used the death penalty was in July 2014, when Joseph Wood was given 15 doses of a two-drug combination over two hours in an execution that his lawyers said was botched. Arizona has 112 prisoners on death row.
On Wednesday, the South Carolina Supreme Court issued a temporary stay blocking the state from carrying out what was set to be its first-ever firing squad execution.
source: https://www.cbsnews.com/news/clarence-dixon-arizona-execution-lethal-injection-gas-chamber/