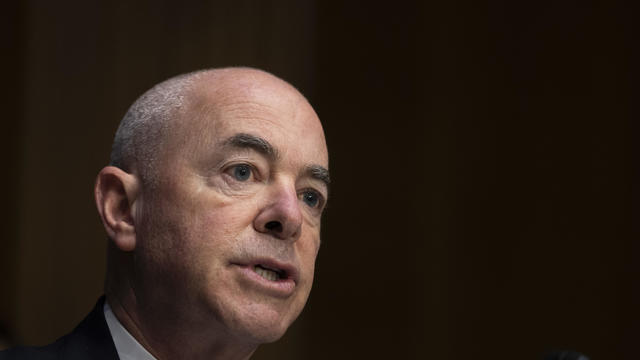 Homeland Security Secretary Alejandro Mayorkas claimed there is no double standard in allowing Ukrainian refugees into the U.S., while thousands of migrants from Latin America are also waiting at the border.
Last week, the U.S. allowed "close to 3,000" Ukrainians into the country, Mayorkas told "CBS Evening News" anchor and managing editor Norah O'Donnell on Wednesday.
U.S. border officials were directed in early March to consider exempting Ukrainians from the Trump-era policy, known as Title 42, that led to the quick deportations of hundreds of thousands of migrants from Mexico and Central America during the COVID-19 pandemic. The Biden administration announced earlier this month that it would wind down Title 42 in late May, but it is currently still in effect.
According to a DHS memo obtained by CBS News in March, U.S. authorities along the Mexican border were instructed to consider exempting Ukrainians from Title 42. Mayorkas said in a call with reporters at the time that the guidance is designed to remind Customs and Border Protection officers that their power to exempt certain migrants from Title 42 applies to Ukrainians seeking U.S. refuge.
"What we do on an individualized basis is evaluate whether a Ukrainian family and frankly other families from other countries qualify for our discretionary authority for granting humanitarian parole. Do they present to us an urgent humanitarian condition that requires special treatment? And that's not specific to Ukrainians. We apply that across the board," Mayorkas told O'Donnell on Wednesday.
When asked if there was a double standard, he said, "There is not."
With the end of Title 42, the Biden administration is preparing for an increase in migrants applying for asylum at the border in the coming weeks. When asked if he thought the end of Title 42 would lead to a surge in migration, Mayorkas said "It's very difficult to predict what the migration will be but we are planning for different scenarios."
"We are at the border surging resources," he said, adding, "We very well could [see a surge]. And our job is to be prepared to address it."
"What distinguishes us from the past is the fact that we will not implement policies of cruelty that disregard our asylum laws," he added. "We are rebuilding a system that was entirely dismantled."
Caitlin Yilek is a digital producer for CBS News. Reach her at [email protected] Follow her on Twitter: https://twitter.com/hausofcait
source: https://www.cbsnews.com/news/ukraine-refugees-mayorkas-us-mexico-border-title-42/