Covid-19: One in four adults not boosted as demand dries up

The Covid-19 booster vaccine campaign has all but stalled, with demand drying up and the rate of booster coverage having declined. 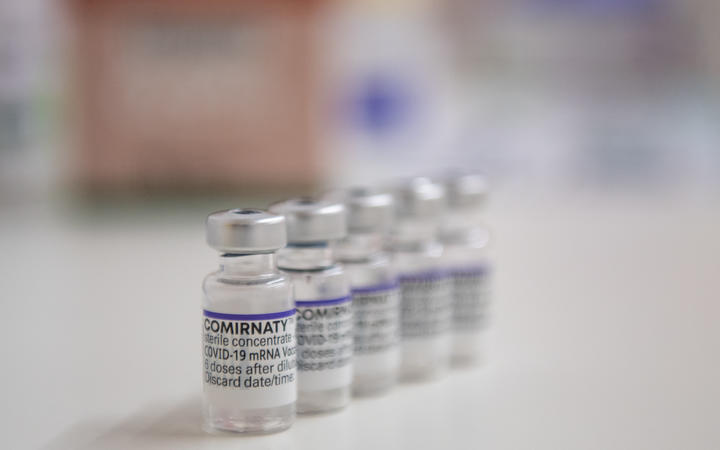 There are still 979,000 people who are eligible for a booster but haven't got one. Just over 71 percent of eligible people are boosted, compared to over 95 percent double vaccinated. This means over one in four adults have chosen not to have a booster shot.

"[Demand] dropped off the edge of a cliff mid-to-late March... It was absolutely sudden. You can draw a line on it and go 'There it is. That's the point'," said Anthony Roberts, owner of Palmerston North's Cook Street Pharmacy.

The national numbers back up his experience.

The percentage of eligible people boosted has not only stopped rising, it's actually falling.

A few weeks ago, 72.8 percent of those eligible had been vaccinated. But since then, 16 and 17-year-olds became eligible, as well as the day-to-day increase in eligibility of people who had their second shot three months ago.

Now, only 71.2 percent of eligible people have had a booster shot.

Pharmacist Anthony Roberts doubted if the numbers would pick up, or if the booster campaign was effectively over.

"I'd like to think not, but practically it kind of looks that way."

Papakura GP Matire Harwood said it was interesting that so many fully vaccinated people had chosen not to get the third, even though it is exactly the same vaccine they have had in their body before - twice.

"It has been more difficult to get them to think about having a booster shot," Harwood said.

Although the national booster rate is 71 percent, the number of eligible boosted Māori (57 percent) and Pasifika (59 percent) is lower.

Dr Harwood said some of the reasons for the hesitancy included a fear of side effects, and the possibility of further boosters.

"[They're] saying 'if we go on to have a third [vaccine shot], that opens up the door to have a fourth or fifth or annual vaccinations', which is interesting given that these are the same people that have been ok coming in for their flu vax each year."

Another likely reason for the lower uptake: there have not been widespread mandates for boosters, as there was to be double vaccinated for some people's jobs or to get a vaccine pass.

Dr Harwood said a lot of other people have recently had Covid, so they don't think they need a vaccine anymore.

University of Auckland epidemiologist Rod Jackson thought the booster rollout was pretty much done for now.

"So I think it's going to take another wave, a new variant, or vaccine passes, to get people to get boosted," Dr Jackson said.

He said the government may consider bringing back vaccine passes, but increasing the requirement to having had three doses to be considered vaccinated. This would help increase the booster uptake, he said.

"If we see our hospital system being threatened - and that's going to be threatened in a normal winter... that may be enough to get the government to decide to make the third dose part of being fully vaccinated and reintroduce [vaccine] passes."

A UK study shows the Pfizer vaccine protects against hospitalisation by 90 percent two weeks after the dose, which falls to 75 percent after three months.

But that protection - and the protection offered from an actual Covid infection - wanes quickly with Omicron.

Rod Jackson said ahead of a winter wave of Covid, it was a "no brainer" for a fourth vaccine dose - a second booster - to be approved for certain older or immunocompromised people, which he said had been shown to be effective in Israel.