An Auckland bar that has continued to use vaccine passes has received a one star Facebook review from its own landlord. 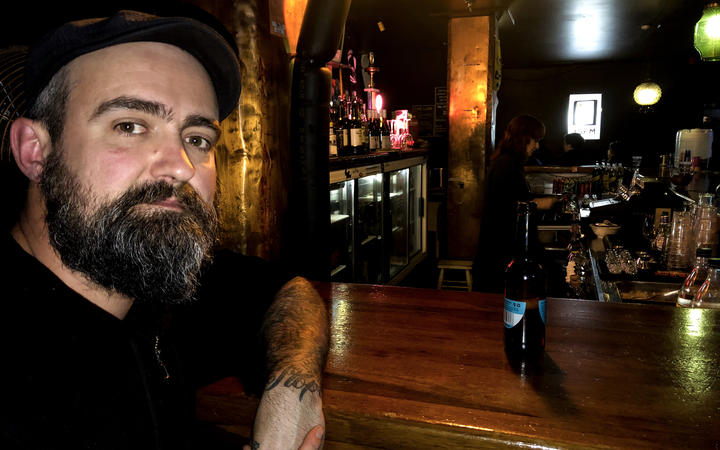 Paul Reid of Icon Group claims Whammy Bar "used to be cool", and told RNZ social media was a "fantastic" way to share his views about his tenant.

Reid, who is also a former Shortland Street actor and musician, posted the review last night to the surprise of Whammy Bar staff.

"I first thought it was probably a fake account, then I went through and found out it was his real account. I shared it with a couple of staff going, 'this is kind of mind-bending'," co-owner Tom Anderson said.

The review was: "This used to be a cool punk rock dive bar...you know punk anti establishment cool kinda vibe.. now there's Nothing more punk rock than "can I scan your vaccine pass please" lol."

Contacted by RNZ today, Paul Reid stood by his words.

"When did the alternative left become the mainstream kind of government, enforcing people? I was perplexed by it all," he said.

"I'm also a member of the public as well and I'm allowed to have an opinion. I just wanted to utilise my freedom of speech."

Asked how often he visits Whammy Bar as a customer, Reid said he sometimes goes to "check pipes and fix things".

He said it seemed like a "poor business decision to decide to voluntarily exclude a certain percentage of the population".

In Auckland, 98.3 percent of the eligible population is currently vaccinated, including Reid.

"It's going to draw a lot of attention to them. And there's going to be a lot of people that completely disagree with me. Instead of slandering me online, they can go show their support for Whammy Bar."

That has happened, with dozens of positive reviews arriving on Whammy Bar's Facebook page in the hours after Paul Reid's negative one.

The situation also drew the attention of Auckland Central MP Chloe Swarbrick, who said "I don't know how much 'landlord' and 'punk rock' align".

"I do think that it was really, deeply, unfortunate that a commercial landlord has decided to weigh in and effectively neg their own tenant," she said.

In Paul Reid's comments on Whammy Bar's Facebook, he said he'd given Whammy Bar $60,000 throughout Covid-19 to help it cover rent.

Whammy Bar's Tom Anderson felt that was a bit misleading.

"We have a good relationship with our property managers and we've negotiated rent breaks throughout the pandemic. Unfortunately he chose to break the confidentiality of and air publicly which was unfortunate ... especially considering he framed it as if he'd donated us a large amount of money, rather than have to legally oblige to a clause on our lease agreement," he said.

Reid said Icon Group had given out about $2 million in rent relief overall.

"If it wasn't for the Icon Group's contribution many of these businesses that we love and hold so dearly would be completely gone," he said.

Another group of its tenants that received rent relief were in the headlines in October, when Icon Group also served them with notices demanding rent arrears.

Whammy Bar is sticking by its decision to keep vaccine passes.

Anderson says with high numbers of Covid-19 cases being recorded each day, he knows what the bars staff and customers want: "and that's to feel safe".