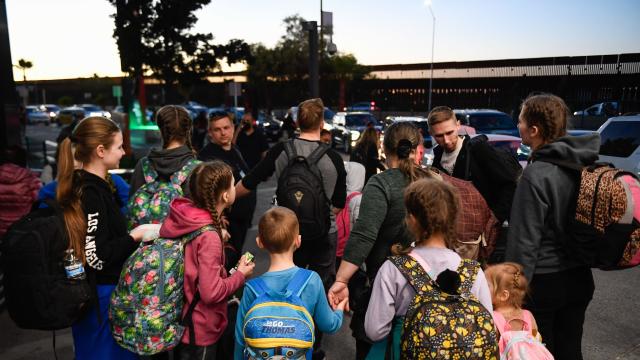 The Biden administration is expanding Temporary Protected Status (TPS) eligibility for Ukrainians living in the U.S., moving up the program's cut-off date by six weeks, the Department of Homeland Security (DHS) announced Monday.
In early March, DHS Secretary Alejandro Mayorkas announced a TPS program to shield Ukrainians in the U.S. from deportation, citing Russia's invasion of Ukraine. At the time, Mayorkas said only Ukrainians living in the U.S. as of March 1 would qualify for TPS, which also provides work permits.
On Friday, however, Mayorkas said in a notice that Ukrainians residing in the U.S. as of April 11 would be eligible for TPS if they meet other eligibility rules and pass background checks. The government estimates that 59,600 Ukrainians could apply for TPS after the program is opened to applications on Tuesday.
The cut-off date change could make thousands of additional Ukrainians who have managed to reach the U.S. following Russia invasion, including those who have been allowed to enter the U.S. through the Mexican border on humanitarian grounds, eligible for TPS.
A 1990 law allows DHS to offer TPS to immigrants from countries experiencing armed conflict, environmental disasters or other "extraordinary" emergencies that would prevent their safe return.
In his notice Friday, Mayorkas said the war in Ukraine "poses a serious danger" to Ukrainians who return there, citing Russia's sustained bombardment of Ukrainian cities, alleged human rights abuses committed by Russian forces, the mass displacement of civilians and the conflict's impact on critical services.
"Extraordinary and temporary conditions, including destroyed infrastructure, scarce resources, and lack of access to healthcare, prevent Ukrainian nationals from returning to their homeland in safety," Mayorkas said.
U.S. Immigration and Customs Enforcement (ICE) suspended deportations to Ukraine and other countries in the region in early March.
Russia's invasion of Ukraine in late February sparked the largest refugee crisis since World War II, forcing nearly 5 million people to flee the country in less than three months, according to the United Nations.
President Biden last month pledged to welcome up to 100,000 Ukrainians displaced by the war, but the U.S. has yet to announce any programs or policy changes to accomplish the ambitious objective.
Because they need visas to come to the U.S. directly, thousands of Ukrainians have undertaken a days-long trek from Europe to Mexico to reach the U.S. southern border, where officials have been instructed to consider exempting Ukrainians from pandemic-era entry restrictions and admit them on humanitarian grounds.
Between February 1 and April 6, U.S. Customs and Border Protection (CBP) officials processed nearly 10,000 Ukrainians who lacked prior permission to enter the country, an unprecedented number, according to internal DHS data obtained by CBS News.
During that same time period, 41,000 Ukrainians entering the U.S. with visas were processed by CBP officials, the DHS figures show.
In March, only a dozen Ukrainians entered the U.S. through the traditional refugee process, which typically takes years to complete because of United Nations referrals, interviews, medical checks and security screenings, State Department figures show.
Unlike the Trump administration, which sought to curtail humanitarian immigration programs, the Biden administration has used the TPS authority extensively to provide deportation protection to hundreds of thousands of immigrants from countries plagued by war, ethnic strife, political turmoil and natural disasters.
The designations by the Biden administration have made approximately 600,000 immigrants in the U.S. eligible for TPS, including citizens of Afghanistan, Cameroon, Haiti, Myanmar and Venezuela, government estimates show.
Camilo Montoya-Galvez is the immigration reporter at CBS News. Based in Washington, he covers immigration policy and politics.
source: https://www.cbsnews.com/news/temporary-protected-status-ukrainians-us-eligibility/