U.S. food prices are likely to keep rising. Here's why. 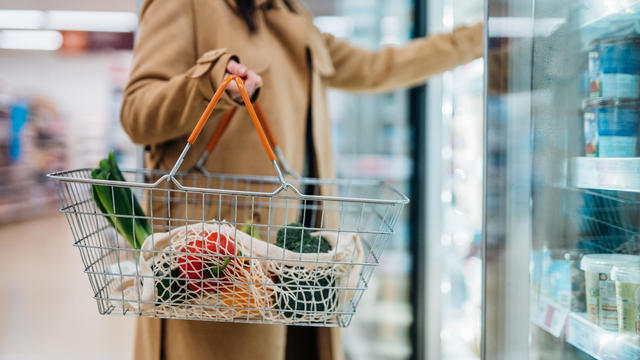 Industry data show that Americans are spending more on food than before the pandemic. And in a sign of the times, that is driving up food prices amid the sharpest bout of inflation in the U.S in 40 years.
"Customer demand continues to outpace our ability to supply products," Tyson Foods CEO Donnie King told a quarterly earnings call in February. Tyson's average sales price for the quarter rose nearly 20% compared to a year ago, helping the meat company recoup higher costs including for labor and transportation.
Americans are paying 10% more for food the buy at the grocery store than a year ago, with beef prices rising 16%, federal data shows.
Factoring in both grocery store and restaurant purchases, food prices in March were up nearly 9% from a year ago amid surging demand over the last year, according to BofA Securities analyst Alexander Lin.
"Americans are eating more than they did in the past, which has constrained retail inventories," he said in a report.
Lin also expects Russia's invasion of Ukraine to lead to "sustained price increases" in the U.S. later this year and into 2023.
While most of what Americans spend on food has more to do with marketing and other expenses unrelated to U.S. farms, costs are still rising up and down the supply chain, Lin noted.
The cost of agricultural chemicals such as fertilizers and pesticides has risen 50% over the past year, with the war in Ukraine adding further pressure as Russia is a major exporter of nitrogen, potassium and phosphorous fertilizers.
The USDA expects all food prices to rise between 4.5% and 5.5% this year.
Rising energy and transportation costs impact many things, food included. Trucking is the primary mode of transportation for food products, and the industry was already dealing with a shortage of drivers before the pandemic. Trucking costs have spiked during the pandemic.
Another factor driving up food prices: the worst outbreak of avian flu since 2015, which is impacting commercial and backyard flocks in 29 states, according to a federal tally. It's also already pushing egg prices higher, and poultry costs may not be far behind. The USDA said it now expects poultry prices to rise between 6% and 7% and egg costs to increase from 2.5% to 3.5% this year.
Higher labor costs are another factor, but "companies have regained pricing power and are comfortable passing on these costs to the consumer," Lin said.
The resulting expansion in corporate margins drew a more negative take from one watchdog group, which last week released a report contending some of the nation's biggest retailers had used surging inflation as a guise to raise prices and profits.
source: https://www.cbsnews.com/news/food-prices-inflation-grocery-stores/