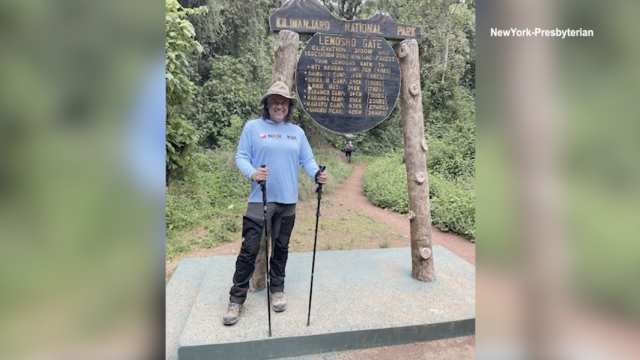 In June 2019, Steve Wilson was going on a bike ride. Like many of us often do, he checked his phone beforehand, and saw a moving post about his friend's daughter. "She was a junior in high school at the time, she just received a life-saving kidney from a woman in town," Wilson told CBS News. "And they didn't even know this woman til they made the plea for their daughter."
"So, I became emotional. I just thought that is the coolest thing," said Wilson, who lives in Westchester, N.Y. "I took a long bike ride thinking that feeling would go away, and I kept thinking, 'I would love to do something like that one day.'"
After seeing the post, Wilson selflessly decided to become a living donor himself, donating a kidney, while he was alive, to someone he didn't know.
"I knew it would go to someone. It ultimately went to someone across the country," Wilson said. "They took my kidney at New York-Presbyterian Weill Cornell and they hustled it over to the airport and flew it out to the West Coast."
He said he still doesn't know the person who received his kidney and he probably never will, which he's fine with. He just wanted it to change somebody's life, he said.
Going through an elective surgery may seem daunting, but Wilson says all it takes is two weeks of your life for the operation and recovery. And to prove that it isn't burdensome, Wilson and fellow living donors embarked on an even harder mission: Summiting Mount Kilimanjaro.
"I do think that having that purpose made it a little bit easier. But there were some people – and I was one of them – that really plowed hard to get through. And the purpose behind it was the reason you just kept going," Wilson said.
The team reached the summit on March 10 — symbolically, World Kidney Day. As for whether the climb to encourage living donations was worth it, Wilson said he inspired at least friend to consider becoming a living donor, but he thinks the Kilimanjaro summit could have inspired countless others.
"I think a lot more than one person will consider donating a kidney," he said. "Because so many people aren't aware that you can actually donate a kidney, that you only need one to live. Many people are born with one, and most people probably don't even know that."
Not only did the headline-making Kilimanjaro summit raise awareness for living donors, but Wilson's own donation turned into a chain reaction of giving.
"My kidney went to somebody. And then that somebody had a willing donor who wasn't a match, but that person donated to somebody else, and it started a chain, whereby three people received kidneys," he said. "All for, again, a two-week inconvenience to me."
Caitlin O'Kane is a digital content producer covering trending stories for CBS News and its good news brand, The Uplift.
source: https://www.cbsnews.com/news/steve-wilson-donated-kidney-summited-mount-kilimanjaro/