A Cantabrian World War II hero well-known overseas is being recognised at home this Anzac Weekend. 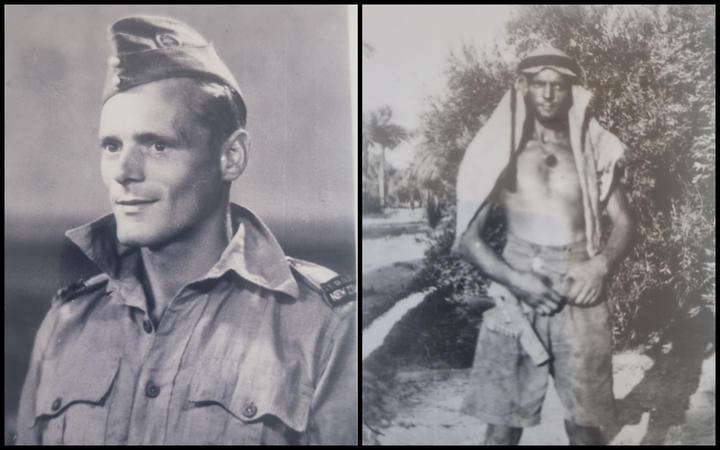 Sergeant Edgar Sanders served in Popskis Private Army, a secret British intelligence unit and his bravery earned him the Military Medal in 1942.

But his son, Peter Sanders, remembers his father as a humble man who loved the outdoors.

One of the strongest memories of his dad was going for family camping trips to the West Coast and sleeping in the car.

Sanders said he did not find out about a lot of his dad's military standing until after he died.

"I went to visit a veteran friend of his and he was talking about a reunion they had in 1947. They weren't sure if dad was going to make it but they'd heard he was in town so they made a space for him at the dinner table," he recounted.

"All of a sudden, the doors open up and they see this figure ... and they all looked up and went 'oh, it's Sandy!' He's half drunk because he's been at the local pub, drinking with all the locals.

"Then the veteran said they all stood up and clapped him to his seat, because that's how much respect they had for my dad. And I was like 'wow'."

Sergeant Sandy grew up in Christchurch but was searching for old pirate treasure with a friend in Trinidad when the war broke out, he explained.

"They bought the yacht back to England... and dad went to the New Zealand Embassy and said 'I'm a Kiwi here and I want to sign up.'

"The British Officers were trying this new special forces thing called the Long Range Desert Group and they wanted people who were brave, resourceful, and who could navigate. Dad fitted the bill and joined."

The group were based in Northern Africa and Sanders said his father often carried out dangerous operations, and frequently went behind enemy lines.

They would collect information on the enemy and would use it to destroy valuable resources.

"They got into blowing up ammunition stores, aeroplanes, communications and sometimes would even put bombs on the roads and blow vehicles up too," Peter Sanders said.

"After a particularly big and successful raid, the Germans sent everything after them and there was only one vehicle left at the end of it, which they loaded all the injured people into and the rest of them, including dad, had to walk 200 miles across the desert before they met any Allied forces. And that's when dad met Popski," he added.

Popski started up a secret intelligence unit of around 35 men called the Popski Private Army (PPA), which relocated to Italy, but continued going into German territory and destroying resources.

"It was a unique unit and lots of people in New Zealand don't know about it. Dad used to say when they were walking around people used to ask what the PPA badge on their uniform stood for and they used to say 'petrol pump attendants'," Sanders explained.

The New Zealand Remembrance Army have rededicated Sergeant Sanders' headstone to include the units he served for.

Set up four years ago by Major Simon Strombom, the Remembrance Army restore, find and maintain military headstones of veterans across the country.

"He is a hugely significant grave. The SAS are coming down for the unveiling and are heavily involved... He is quite unique in Commonwealth forces," he said.

"[Sandy] is considered a legend and as a very brave man by both units."

Peter Sanders said it meant a lot that the Remembrance Army had rededicated the headstone.

"We always wanted to do something because he had a really modest headstone. It's amazing that they've gone and put a nice one up for him... It's quite humbling and we are very very happy and proud."

It will be unveiled today in a small ceremony in Christchurch's Linwood Cemetery at 1pm today.