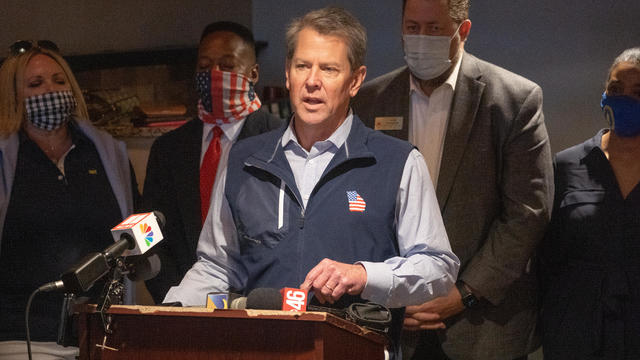 Georgia Governor Brian Kemp on Tuesday signed a law allowing residents to carry handguns in public without a license or background check.
Kemp, a Republican, backed a similar proposal when he ran for governor in 2018, and expanding gun rights was a key part of his platform. He urged the legislature to take up the issue at a press conference earlier this year.
"(This bill) makes sure that law-abiding Georgians, including our daughters and your family too, can protect themselves without having to have permission from your state government," Kemp said Tuesday before signing the bill into law. "This is an issue that I campaigned on in 2018 alongside so many members that are standing with us today. And by working together, we have gotten it across the finish line."
The law allows a "lawful weapons carrier" to carry a concealed handgun where firearms are permitted without a license from the state. A "lawful weapons carrier" is defined as anyone who is eligible to purchase a firearm.
Under current law, Georgians have to obtain a license to carry a loaded handgun outside of their homes, businesses or cars. That requires filling out an application, paying a fee, submitting fingerprints and undergoing a background check.
Long guns can already be carried in many places without a permit. Background checks will still be required when purchasing a handgun from a store or a dealer.
Kemp will likely spend significant time on the campaign trail touting the legislation leading up to his May 24 primary against former Senator David Perdue. Kemp and supporters of the legislation have argued that the law enhances personal safety and protects Second Amendment rights.
Although Kemp touted his support for this type of legislation during the 2018 gubernatorial campaign, Perdue has tried to claim credit for pushing Kemp and GOP lawmakers to address the issue.
"A lot of things that they did accomplish in this session, they happened after I got in the race," Perdue told Fox News last week. "Constitutional carry was going nowhere. I got in and said we ought to have constitutional carry. Next thing I know, they're working on a bill to get that done."
A January poll from the Atlanta Journal Constitution found that 44% of Republicans in the state supported allowing people to carry concealed handguns in public without a permit. Overall, 70% of registered Georgia voters opposed such a measure.
Democrats and gun safety advocates have said that the process of applying for a license has led to thousands of people being denied licenses who are not allowed to possess weapons, including convicted felons and people who have been hospitalized for mental health issues or treated for addiction in recent years. A study in the National Bureau of Economic Research found that states that loosened permit requirements saw a 13 to 15% increase in violent crime 10 years down the road.
"Kemp knows states that pass criminal carry see increases in gun violence," Democratic gubernatorial candidate Stacey Abrams tweeted. "He knows 5,200+ permits were denied in a single year, for example, because of felony convictions or domestic abuse. He knows the danger. Kemp just doesn't care."
Abrams and other opponents have branded the law as "criminal carry" as a play on the term that advocates use for it, "constitutional carry."
The Atlanta Journal Constitution reported in January that law enforcement officials were split on the issue.
In addition to the gun legislation signed Tuesday, Kemp will likely be touting other conservative bills passed by the legislature over the next several weeks, including bills restricting how teachers talk about race in class, potentially allowing the state athletic association to ban transgender athletes from participating in womens sports and giving the state bureau of investigation authority to investigate claims of election fraud.
CBS News political reporter.
source: https://www.cbsnews.com/news/georgia-permitless-carry-bill-signed-governor-brian-kemp/